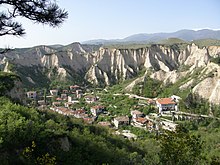 Melnik and the sandstone pyramids 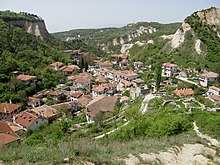 Melnik between the weathered sandstone formations

The pyramids of Melnik ( Bulgarian Мелнишки пирамиди Melnischki piramidi ) are a natural phenomenon consisting of heavily eroded earth pyramids , towering sandstone pillars, from a sand-clay mixture on the southwestern foothills of the Pirin Mountains , in the immediate vicinity of the very small Bulgarian town of Meln .

After Kulata on the Bulgarian-Greek border, it is 17 km to the south as the crow flies. The town of Sandanski in the northwest is 20 km away; the Sofia - Athens trunk road is 12 km away. The Rozhen Monastery is located 6 km northeast of the Pyramids of Melnik. The whole wider area of ​​Melnik is littered with scattered groups of eroded earth pyramids that extend to the Roschen monastery. The hiking trail to Roschen Abbey (1.5 hours by foot) leads directly through the striking sandstone pillars of the Melnik pyramids. The pyramids are located in Blagoevgrad Oblast.

Geologically, the area around Melnik consists of gray-white Pliocene sand with admixtures of clay minerals . Over the course of time, a layer up to 150 m thick, made of a rock-sand mixture of weathered rocks from the Pirin Mountains, has been deposited on top. The pyramids were formed there.

The bizarre shapes of the reddish sand and limestone cliffs (or sand pyramids) of Melnik are the result of erosion in the karst. The pyramids reach a height of up to 100 m. Typical are their sandy, steeply sloping walls, which are in places vertical. Hardwoods and grasses grow on their peaks. The soil consists of a mixture of sand and clay. The Melnik pyramids are still in the making, and their appearance and shape are gradually changing. In 1960 they were declared a protected natural object in Bulgaria. The protected area today covers an area of ​​13,579.14 ha. The protected area with the sandstone pyramids extends in the vicinity of Melnik, extends north to the villages of Gorna Sushitsa ( Bulgarian Горна Сушица ) and Paskarewo ( Bulgarian Паскарево ) and to the south to the villages of Katunzi ( Bulgarian Катунци ) and Kalimanzi ( Bulgarian Калиманци ). The terrain is mountainous and criss-crossed by blurred mountain ridges. The Roschen Monastery is located nearby .

In addition to the actual pyramids with the shape of an “Egyptian pyramid”, there are also other rock formations in the vicinity of Melnik, such as mushroom-shaped rocks, pinnacles and cones.

A similar formation can be found in the Rila Mountains near the village of Stob - the Stob pyramids .

Most of the area is covered by grass and scrub. But there are also deciduous forests with downy oak (Quercus pubescens), Hungarian oak (Quercus frainetto), turkey oak (Quercus cerris) and Oriental hornbeam found (Carpinus orientalis). However, hornbeams predominate , often forming their own forests and sprouts, interspersed with Mediterranean plants such as juniper . A typical vegetation for the pyramids of Melnik is the evergreen shrub of the broad-leaved stone linden (Phillyrea latifolia) together with xerothermal (dry warm climate, steppe and desert-like habitats) grasses. There are also some compact forests of Kermes oak (Quercus coccifera).

In the vicinity of the Melnik pyramids, 113 species of birds have been counted, 12 of which were included in the Bulgarian Red Book of Endangered Species in 1985 . According to BirdLife International (2004), 49 of the species encountered are of importance for European nature conservation. 19 species fall into the SPEC2 category (affected by extinction in Europe). There are 30 species in the SPEC3 category. For the calender lark (Melanocorypha calandra) the area of ​​the pyramids of Melnik is one of the most important nesting areas in Bulgaria. Furthermore, five bird species can be found, which are restricted to one biome : cap bunting (Emberiza melanocephala), olive mockers (Hippolais olivetorum), Mediterranean wheatear (Oenanthe hispanica), white-bearded warbler (Sylvia cantillans) and velvet warbler (Sylvia melanocephala).

There is a larger nesting population in the region of:

The bird sanctuary Pyramiden von Melnik is part of the network of nature reserve Natura 2000 and was set up in accordance with European requirements for the protection of wild birds. Next to Melnik and its surroundings the area with an area of 13,580 hectares, the areas of the following villages, all in the municipality of Sandanski of the Blagoevgrad are: