from Wikipedia, the free encyclopedia
This is the spotted version , flagged on July 2nd, 2020 . There are 8 pending changes that have yet to be viewed.

The Blagoevgrad Oblast ( Bulgarian Област Благоевград ) is a region in southwestern Bulgaria . It borders Greece and North Macedonia and lies on the Struma River , which connects Bulgaria and Greece. The region belongs to the wider area of Macedonia and is therefore also referred to as Pirin Macedonia . The largest city in the region is Blagoevgrad of the same name . The Pirin National Park is located in the region .

The population of the region calls themselves Macedonians , a regional name. 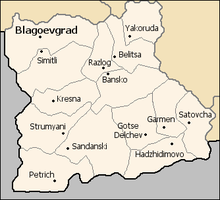 The municipality of Blagoevgrad Oblast

Blagoevgrad Oblast is divided into 14 municipalities :

The abbreviation “Macedonian” (bulg. Македонец / makedonez), which is common in Bulgaria, can be misleading in the German translation as it can lead to confusion with the people of the Republic of North Macedonia or with the Slavic majority there, who also call themselves Makedonzi (Македонци ; transl. Makedonci, see Macedonians (Slavic ethnicity) ). In German-language literature, the vague term “Bulgarian-Macedonian population” is also used.

The Macedonian Bulgarians are not a separate ethnic group of the Bulgarians , but a regional identity that is shared by many people in this region who have different national self-confidence and speak different languages.

“The interpretation of the ethnogenesis and formation of the southern Slavs in the region of Macedonia from prehistoric times to the present day, which originate from propagandists of history and from trained historians in Athens, Belgrade, Sofia, Thessaloniki and elsewhere, differ so greatly that they are completely incompatible are."

Accordingly, the existence of this ethnic group claimed by the Bulgarian side is denied by the Serbian , North Macedonian and Greek sides. However, the term “Macedonian Bulgarians” is rarely used in international literature.

For years Bulgaria has been taking massive action against the North Macedonian minority in the Blagoevgrad district, who state their nationality as Macedonians. The official Bulgarian side denies the existence of these " Vardar Macedonians " in Bulgaria and applies the term "Macedonians" only to the Bulgarian majority population of the Blagoevgrad Oblast.

There are overlaps and contradicting statements and claims with the Slavic ethnic group Macedonians, who are the people we know today as Macedonians and who continued into the 20th century from the outside, but also partly in the self-definition for Bulgarians (or also Serbs ) was held.

“Influenced by the Enlightenment and Philhellenism, the ancient terms were used again in Western Europe at the turn of the 18th and 19th centuries to denote the geographic features of European Turkey. This also led to the reuse of the historical landscape name Macedonia. ... Both for the generation strongly influenced by Pan-Slavic feelings, who resisted the dominant Greek cultural influence in the middle of the 19th century, as well as for the generation of national revolutionaries of the " Inner Macedonian Revolutionary Organization " (VMRO) founded in 1892 , the Macedonians were a regional group of the Bulgarian nation. In this sense, Macedonians are still used in Bulgaria today. "

On the one hand there are inhabitants of Bulgaria, the political Bulgarian part of geographical Macedonia, who still consider themselves to be members of a regional-cultural sub-group of the Bulgarian nation. In this sense, as a regional identity, the term “Macedonian Bulgarians” can certainly be used in relation to the present.

However, this current population group should not be confused, mixed or even subordinated to the national identities of the Slavic-speaking population of geographical Macedonia as a whole, since the development of the Macedonians in the 20th century in the Bulgarian, Serbian, Yugoslav and Greek parts of Macedonia was significantly different .

The term "Macedonian Bulgarians", as it was used in the 19th and beginning of the 20th century to denote the Slavic-speaking population of geographical Macedonia as a whole, is to be distinguished from the identical-sounding term "Macedonian Bulgarians", which refers to a Population group in today's Bulgaria refers. They are two different things, even if the identity construct of the latter is based on the traditions of the former. But the identity construct of today's Macedonian nation does that too. Since these two interpretations are incompatible, there are differences of opinion among historians, politicians and nationalists who try to assert one of the two as the correct one.

The Bulgarian side tries to prevent these Macedonians from appearing politically, as otherwise they would have to be officially recognized as a minority with all the rights associated with it.

Amnesty International reported in its 2002 annual report on people against whom legal proceedings were instituted in Blagoevgrad for leafleting “asking local residents to identify themselves as Macedonians in the census”. On the other hand, it is argued by the Bulgarian side that these people (Bulgarian ОМО Илинден-Пирин ) are a tiny group of 360 people, who make up only 0.01% of the population in the Blagoevgrad district and in the whole Bulgaria represent only 0.0048% of the population.

Amnesty International's 2007 annual report on Bulgaria also contained complaints about how the Macedonian minority was dealt with in Bulgaria.

“The authorities and the judiciary continued to deny the existence of a Macedonian minority in Bulgaria and insisted on their position that there is no legal obligation to protect them. This policy was supported by all parties represented in parliament. In October the Sofia City Court denied official approval of the political party OMO Ilinden PIRIN, which represents part of the Macedonian minority in Bulgaria, despite the fact that the European Court of Human Rights ruled in October 2005 that the party's existing ban constituted a violation of Right to freedom of assembly and association. In November the European Parliament's rapporteur on Bulgaria and the European Commissioner responsible for EU enlargement urged the government to give OMO Ilinden PIRIN official approval. "

The Bulgarian side countered this by stating that the 500 signatures required by law to establish a party were not raised. In addition, the aim of this party violates the Bulgarian Constitution (Article 11, Clause 4), which stipulates: “No political parties may be founded on an ethnic, racial or religious basis, and no parties that seek the violent seizure of state power Have set a goal. "