Pyramidula pusilla , also known as rock pyramid snail, is a species of snail in the family of pyramid snails (Pyramidulidae) from the suborder of land snails (Stylommatophora).

The small, right -hand wound case is pressed-top-shaped with very lightly shouldered turns rounded on the periphery and a deep seam. In the adult stage 4½ turns are formed. The case measures up to 2.95 mm in width and up to 2.25 mm in height, and is therefore significantly wider than it is high. The turns increase evenly, only the last loop drops slightly from the turn axis. The mouth is flattened, transversely shaped and is oblique to the axis of the winding. The edge of the mouth is thin, sharp and fragile. It is only slightly turned over in the navel area. The navel is open and deep and takes up about a quarter of the width of the case. In some populations this value can be up to a third.

The case is dark horn brown to reddish brown in color. In older animals, the color can already be faded and almost white. The surface shows very fine and closely spaced growth strips. This makes the case shine. The embryonic shell is almost smooth.

In the male tract of the genital apparatus, the spermatic duct penetrates apically into the epiphallus. A small sack-shaped appendix is ​​formed at the transition from the epiphallus to the penis. The penis is comparatively short. The penile retractor muscle attaches roughly in the middle of the epiphallus. In the female tract, the free fallopian tube is about twice as long as the vagina. The spermathec is small and oblong-elliptical in shape. It sits on a short stem. The protein gland is oblong-egg-shaped.

Compared to Pyramidula pusilla, Pyramidula rupestris ismore highly conical and significantly higher than wide, or only very slightly wider than high. The whorls are more curved on the periphery. The hem of the mouth is turned over in the spindle area. 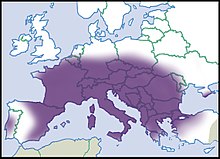 The rock pyramid snail has a huge distribution area that includes almost all of Western and Central Europe. In the northeast, the distribution area extends to the Baltic States, in the south to North Africa and in the southeast to eastern Turkey and the Middle East. There is an isolated occurrence in the Crimea.

In Germany it is mainly found in the southwest, the northernmost occurrences in Germany are the Hönnetal in the Sauerland , the Ith and Thuringia .

The rock pyramid snail lives on dry, exposed limestone rocks and walls. They hide in cracks and crevices, and crawl around on the surface in damp weather. It is bound to calcareous soils. In the Alps it rises up to 3000 m above sea level.

Reproduction takes place in summer. The animals are ovoviviparous , i.e. H. the few (3 to 7, mostly 4 to 6) eggs are held back in the mantle cavity until the young hatch and individually crawl out of the mantle cavity. The young animals have a housing with a diameter of 0.8 mm and 1.5 turns.

The animals graze on the rock surfaces endolithic lichens . Due to their small size, the animals are often transported by birds. Anthropogenic spreading through cuttings and natural stones to which the animals are attached is also common.

According to Welter-Schultes, the name with this author is not available because Vallot's work was an internal examination paper and is therefore not available for scientific use.

The rock pyramid snail is in the red list of endangered animal species in the early warning level.