RSS services are mostly offered on special service websites, so-called RSS channels. A normal RSS channel provides the addressee, similar to a news ticker , with short blocks of information consisting of a headline with a text outline and a link to the original page . Increasingly, however, the complete content of classic web offers is also provided as full-text RSS.

The provision of data in RSS format is also known as an RSS feed . to feed - in the sense of feeding, feeding in, adding. If a user has subscribed to an RSS channel, the client checks the server for updates in the RSS feed at regular intervals .

Working method, function of the subscription 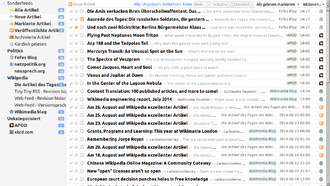 User interface of a feed reader

After the RSS feed has been subscribed, the subscriber can in the news feed reader read. The subscriber to the RSS feed can then view the content (contained in many feeds) directly or follow the links provided and read the full report on the linked page. The address of an RSS feed corresponds to the structure of a URL, as it is also used for websites.

Some web browsers or special programs that are adapted to the similarity to the news ticker can be used to read an RSS feed . The latter are called (synonymously) RSS aggregators, RSS readers or feed readers. Some current e-mail programs already offer RSS reading functions, older ones can be expanded with plugins. There are also applications such as screen savers .

In contrast to notification by e-mail , the initiative with RSS comes from the recipient who has subscribed to the feed. This means that the provider cannot select the readers, but in return does not have to worry about managing the reader base (for example with mailing list software). The reader does not have to disclose that he is watching the source and can subscribe to or unsubscribe from sources much more easily by simply setting the setting in his RSS aggregator.

In particular, RSS makes it easy to monitor a large number of sources such as B. blogs in which there are seldom changes, but which the reader may not want to miss updates.

Because the content is available in a standardized format via RSS, it is also suitable for machine processing. Using RSS, for example, texts from a website can be automatically integrated into another website with the help of an RSS parser , or they can be very easily displayed in specially prepared form on various end devices.

The processing of information in a standardized exchange format / object is also called aggregation , and the publication on other sites is called content syndication . Web pages can be automatically updated with the latest news without the website operator having to update each time. A number of content management systems support this functionality.

RSS is used to store articles on a website or their brief descriptions (especially news reports ) and to make them available in machine-readable form. A so-called RSS feed or news feed (. English about news feed ) is a XML file that the pure structured content - holds, but no - for example, a news site layout , navigation, or other additional information included. Numerous websites that regularly publish articles provide an automatically generated RSS file with the latest articles.

Originally, RSS feeds were used by news sites (initially on the Netscape .com portal) for content syndication . The format gained its current popularity primarily through its use in blogs . In the meantime, MP3 portals have also started to use RSS feeds together with podcasting functionality.

A user can now a so-called aggregator program or a so-called feed readers use to automatically download the most important for him headlines and short descriptions and display the collected articles ordered. All the aggregator needs for this is a link to the RSS feed.

RSS feeds are also suitable for processing by specialized search engines and alert services . For example, the articles within an RSS feed can be filtered by relevant services according to sources or keywords and combined to form a new RSS feed.

RSS is one of the first areas of application for the semantic web .

The following parts of history since 2007 seem out of date to be : Today's meaning / use
Please help with to the missing information research and insert .

RSS has prevailed mainly through weblogs , as most authors offered RSS feeds for their articles very early on and many weblog systems generate these automatically and integrate them into the website.

Originally it was mainly about text. This has changed in the meantime: Podcasts, for example, show that audio or video content can also be distributed well via RSS. B. can be loaded onto portable players.

Technically, RSS is a family of XML -based file formats. The abbreviation RSS has a different meaning in the various technical specifications:

There are currently several versions of RSS, the version numbers of which refer to one another, but which have been published by different companies or developer groups in some cases independently of one another and are also incompatible with one another.

In competition with this is the Atom format, which is also based on XML . RSS and Atom are not compatible with each other, but the two formats can be converted into each other.

The following example shows the source text of a simple RSS feed, which corresponds to the document type RSS 2.0 . The feed contains a channel with two sample items (item).

The author of the entry should be entered in the form " Vollständiger Name, E-Mail-Adresse". This corresponds to an address formed according to RFC 822 (Section 6 ADDRESS SPECIFICATION), which was coded with SGML entities. The date also corresponds to RFC 822 (example: Sat, Nov 15, 2003 09:59:01 +0200). Most RSS readers understand the date of RFC 2822 .

You can link an RSS file in the HTML page, the content of which is machine-readable. This procedure has never been specified for RSS, but almost all aggregator programs can use it to find out the address of the RSS feed of a website (called auto-discovery ). Modern browsers allow the site visitor to subscribe to the linked RSS feed. For example, in Firefox , an RSS button is displayed in the address or status bar of the browser window; However, this is currently only possible if a corresponding add-on has been installed in the browser. An elementary reading function for RSS feeds is still part of all web browsers that are widespread today.

To headdo this, an linkelement is inserted in the area :

It is also possible to use several of these shortcuts.