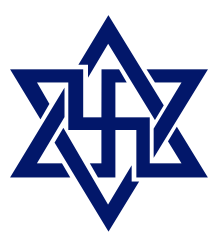 The Rael movement , also called Raelism or Raelistic religion , until 1976 also MADECH (mouvement pour l'accueil des extraterrestres, créateurs de l'humanité, dt .: Movement for the reception of extraterrestrials, creators of humanity ), is a New Religious Movement that pursues an UFO belief . She is known for wanting to enable human cloning .

The group is financed by paying 3% of the net income that followers have to give. Another source of income are inheritances. It also has its own era , with Raël's ( Claude Vorilhon ) year of birth 1946 being counted as year 1.

The New Religious Movement was founded in December 1973 by Claude Vorilhon (* 1946) alias Raël, who claims to have had an encounter with a representative of an extraterrestrial civilization who emerged from a UFO . During his first alleged encounter with the aliens on December 13, 1973, Claude Vorilhon is said to have received a message for humanity, stating that the Elohim came to Earth for the first time 25,000 years ago and, thanks to their mastery of DNA, life was scientific here created. The visitors are said to have given him the name Rael ("who brings the light of the Elohim"). Allegedly he was the half-brother of Jesus Christ , because his mother was kidnapped in a UFO without her knowledge and Vorilhon was conceived there by YHWH , the eldest of the Elohim, on December 25, 1945.

Vorilhon then wrote The Book That Tells the Truth and appeared on television to spread his teaching. The popularity achieved in this way led to the establishment of "MADECH". After two years, Vorilhon had around 700 followers. On October 7, 1975, Vorilhon allegedly visited the alien planet and received the rules of life published in his book The Aliens Took Me To Their Planet .

This was followed by an expansion of the movement across the French-speaking area, which resulted in a renaming, first (1977) in "Rael Movement" ( Mouvement Raëlien ) and in 1998 in "Raelist Religion". 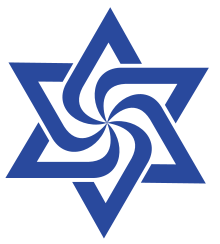 The symbol of Raelism is a hexagram with a swastika . It is worn as a pendant by Raelians. After protests by Jews against the combination of the Star of David and the swastika, the latter was replaced by a stylized daisy blossom. However, the old symbol remains valid, as the Raelians still hope for worldwide acceptance of the swastika. To this end, Raël declared June 23rd to be “Swastika Rehabilitation Day” in 2009 .

The concept of faith of Raëlism combines scientific ideas with biblical traditions. However, these are presented anew from a technological point of view. The doctrine presents itself as completely rational without any reference to the supernatural . It is typical to largely dispense with mystical approaches. The concept is successful due to the combination of a scientific and religious point of view. In addition, the movement is not directed against sensuality and even propagates it.

The Raëlists (also called Raëlians or Raeliens) believe that scientifically advanced, human-like beings (" Elohim "), who were previously thought to be gods, were responsible for the history of creation . This thesis is also represented by Erich von Däniken as pre-astronautics . Creation - as Raël postulates - is a product of these beings who, through superior technology, are able to shape landscapes, create atmospheres and create people (in their image) through cloning technology. This is how the earth was created about 22,000 years ago. The people are said to have developed according to this, whereby according to the philosemitic attitude of Rael the Jews are the most successful human people. When their technical progress became dangerous to the Elohim , they destroyed life on earth with nuclear weapons with the exception of Noach , who was able to save himself and a cell of any kind in a rocket. 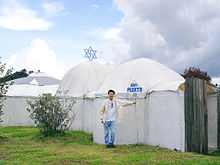 Model of the embassy building in tent form

One of the goals of the Raëlisten is to build an embassy building on neutral territory where the Elohim can be received. The building should be completed by 2025 . Preferred territory would be Israel . However, should it again oppose the will of the Elohim , then the wrath of God would again break out on it. With the return of the Elohim , the age of apocalyptic would begin , in which religions would be replaced by science . It should then come to communion between people and their creators. Through scientific progress and a progress in consciousness - also attainable through the information for example in the "keys" in Raël's books, through meditation - with the perfection of cloning and finally mind uploading , people would be able to achieve earthly immortality and paradisiacal states. As a result, the chosen would lead a godlike life and in turn populate planets with clones.

For the Raëlists, the equivalent for life after death is the combination of immediate whole-body cloning (using biotechnology or nanotechnology ?) And " uploading " into this newly created young body from their own DNA, or a temporary continued existence in an advanced computer. Regular meditations are part of religious practice. According to Raëlian ideas, telepathic contact with the Elohim should be established through the hair, which should serve as antennae . At least once in a lifetime, the followers should let Raël or a person appointed by him lay hands on them. This is to transmit the blueprint of the bodies to the monitoring computer of the Elohim . This enables recovery after death. This thought that man would be restored by cloning is countered by the fact that man would only become what he is through his development in life. Ultimately, these thoughts would reduce people to their pure genetic makeup.

The Raëlists and the cloning

In the belief of the religious group, human cloning is said to be the first step towards the immortality of its members. The Raël movement, Clonaid, claims to have cloned several people. They have already made some headlines saying they had cloned. However, according to witness statements, the company is quite small and out of date, so that the cloning successes are doubted by serious scientists.

In March 2001 there was a hearing before a committee of the United States House of Representatives , in which the Raëlists reaffirmed their commitment to human cloning. In 2001, the movement sought to enforce a lawsuit in the United States that human cloning should become legal there. According to a leading Raelist, Brigitte Boisselier , Clonaid should have succeeded in 2002 in creating the technical basis for cloning people. In December 2002, according to Boisellier, "Eve" was born as the first cloned human. This claim is doubted from the scientific side. Until 2003 there was no scientific evidence of a genetic identity between mother and daughter. Clonaid claimed that an investigation by neutral third parties was possible, but did not want to name the parents or the scientists who were prepared to do so. It is sometimes assumed that the announcement of the success of the cloning was purely an advertising measure for no real reason. A lawsuit was filed in a Florida court over the appointment of a guardian after the birth of "Eves" was announced . After Brigitte Boisselier had given an oath that the child had never stayed in the United States, the court declared that it had no jurisdiction . The Food and Drug Administration (FDA) started investigating the "Eve" case in 2002 because of unapproved genetic tests.

The group has come under fire for ethical concerns associated with cloning . The quota of only 2 to 20% in successful cloning attempts in mammals is cited as critical . The unsuccessful attempts lead to death in the womb or severe deformities. Claude Vorilhon alias Raël as the leader of the group believes that the criticism of cloning is based on religious prejudice, especially on the part of the Catholic Church .

Ufo balloon with Raelism symbol; in front of it a person in a Xenu costume

Michel Houellebecq describes in his novel The Possibility of an Island and his story Lanzarote the group of Elohimites or Azraëlists , whose teachings are very similar to those of Raelism. Houellebecq openly shows his sympathy for Raelism and is friends with Rael himself. Nevertheless, the two stories also show a certain distance. In The Possibility of an Island, the protagonist Daniel25, whose “ancestor” Daniel1 once joined the Elohimites, leaves their orderly life of cloning, contemplation and study 2000 years later in order to find a new form of life on the island of Lanzarote. Even if he does not achieve this goal and, as with all "apostates", his clone line is ended forever, he is not unhappy in the end.