Player of the oriental dāīre ( dāyera ). The recognizable ring of bells on the inside makes the frame drum a dāyera-ye zangī . Oil painting from Persia, 19th century. 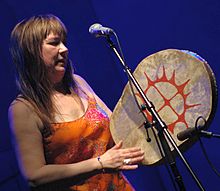 Mari Boine with a shaman's drum of seeds ( runebomme )

A frame drum is a drum with a flat frame, which is usually covered with a skin on one side, in rare cases on both sides. According to the definition of the Hornbostel-Sachs system , the frame height is at most equal to the skin radius. This practical definition distinguishes frame drums from cylinder drums . The transitions are fluid, however, for a frame height up to the skin diameter, classification as a flat drum is possible.

The frame is mostly circular, it can also be rectangular or have another shape. The tone is achieved by hitting the membrane with the hand ( hand drum ), fingers or a mallet, and occasionally also with the fingers on the frame. In some of these membranophones addition to the are idiophones associated clamps , cymbals , bells or metal rings as a clamp ring secured to the frame.

The frame drum is sometimes referred to as the oldest drum type. On representations from Mesopotamia it is in the 3rd millennium BC. Demonstrable. The early Mesopotamian images show women holding a double-headed frame drum with both hands in front of their chests. They were probably small rattle drums filled with grains . They could have been used in fertility cults held for a mother goddess . Single-skin frame drums can be traced back to equipment (frame screens) related to animal skin.

It can be found almost everywhere in the world, for example as a shaman's drum in Northern Europe, Sápmi ("Lapland"), Asia and North America or as an accompanying instrument played with the fingers in the Orient: tar , bendir , riq , daf (duff), daire , mazhar and in Italy tamburello .

In the Bible, the frame drum played mostly by women is tof the Old Testament prophet Miriam mentioned.

One- and two-headed frame drums of the North American Indians ( e.g. the Sioux ) are called cancega ( čháŋčheğa ). After South America arrived frame drums ( pandeiro ) by the Spanish and Portuguese conquistadors. Frame drums that are held by one hand on a handle are stem drums, for example the dhyangro in Nepal .

The bajiao gu is an octagonal two-headed frame drum that is used in Chinese music to accompany singing. In each side a pair of cymbals ( tong bo ) made of small movable metal disks is fixed in a recess. The eight sides are supposed to symbolize the eight banners of the Manchu . The single- headed ghera , whose membrane is glued on, is also octagonal . In the folk music of Rajasthan, it is struck with a stick to accompany singing. Despite its shape, the Hindi word ghera is derived from the Arabic daira , "circle". The Brazilian adufe is rectangular .

The naming of the frame drums is inconsistent, as many names cannot be clearly assigned to a certain variant, but rather designate regionally different types. Bendir can refer to a special variant from Morocco with snare strings . In France , Greece , Turkey and other countries, bendir is the generic term for all large frame drums without bells. Frame drums are part of the Dhikr ceremonies of some Sufi orders .

Musicians such as Glen Velez linked the playing techniques that existed in various cultures and thus developed the frame drum into a modern, multi-faceted instrument that can be used in many musical styles. Associated with this is the development of clamping systems. Traditionally, frame drums were usually only stretched by warming the fur over the fire. Later there were various developments with tuning screws. The most recent development is an air pressure tuning system. The Italian percussionist Carlo Rizzo developed the tamburello through a complex mechanism into a multitone instrument with a two-octave range.

Smaller frame drums with a diameter of around 25 cm found their way into the Orff-Schulwerk and are widely used in elementary and music schools, as well as in children's rooms at home. The frame drums of this type are played both by hand and with a mallet.