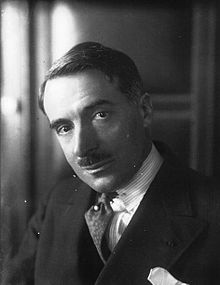 Raoul François Dautry (born September 16, 1880 in Montluçon , † August 21, 1951 in Lourmarin ) was a French engineer and politician who played an important role in the French railway system and in the early days of French nuclear technology.

Dautry studied from 1900 at the École Polytechnique and then was an engineer at the Chemin de Fer du Nord railway company. In this function he was also involved in the construction of the supply railroad lines for the front during the First World War. For example, under his leadership, a new railway line from Beauvais to the front of the Marne Battle of 1914 was built in just a hundred days . Dautry was Director General of the State Railway Administration from 1928 to 1937 and, after the SNCF was founded, he was a member of its management board in 1938. He was responsible for building various garden cities for the railroad workers. In the interwar years he was also on several boards of directors of important French companies. From September 20, 1939 to June 16, 1940 he was Minister of Armaments in France under Édouard Daladier and Paul Reynaud . He also sent a delegation to Norway in 1940 (with the physicists Hans von Halban and Lew Kowarski ) to secure the supplies of heavy water from the access of the Germans and to bring them to England on a destroyer (Milan) via Brest. During the German occupation of France, he withdrew to Lourmarin in the Vaucluse department in the unoccupied zone, where he had had a house since 1932 and was regularly on vacation. 1945 to 1951 he was mayor of Lourmarin.

After the liberation he became Minister for Reconstruction and Urban Development under de Gaulle from November 1944 to January 1946 and initiated, among other things, the reconstruction of the port of Le Havre. He was then General Director of the French Atomic Energy Commission ( Commissariat à l'énergie atomique , CEA) and was involved in the establishment of its research center in Saclay .

He was a Grand Officer of the Legion of Honor and from 1946 a member of the Académie des sciences morales et politiques . In 1949/50 he was the first president of the European Movement France .

A square in Paris in front of the Montparnasse train station is named after him.