A repeat or pattern , in common parlance also called pattern , is understood to be a repetitive, area-filling element for surface design, which is produced by weaving , knitting , dyeing or printing . When weaving fabrics of different patterns can by different types of bonds are designed (Fadenverwebung).

Glencheck and Prince of Wales Check

Here, too, it should be noted that there may be differences between scientific and general language usage. So is often not exactly between Glencheck ( english Glen Urquhart plaid ) and Prince of Wales check distinguished. Here, too, the background is a hitherto ambiguous and in part imprecise source situation.

The Glencheck (English Glen Urquhart Check "Karo"; Glen is a mountain valley) is a traditional pattern for shirts and outerwear such as suits, less often for ties . The design was developed in a district near Loch Ness in the Highlands of Scotland, where Urquhart Castle overlooks Loch Ness.

The contrasts for both types of diamonds can be selected to be different; the stronger, the sportier the occasion or use. Basically, a glen check pattern is more suitable for day wear than for an evening festive appearance.

This classic pattern originated from the Scottish clan costumes , which differ in their different types of checked patterns. In England (where this pattern is very popular) U. also does not distinguish exactly between the Glen Urquhart Check and the Prince of Wales Check , s. o. In France the pattern is known as Prince de Galle and in Austria as Esterhazy . 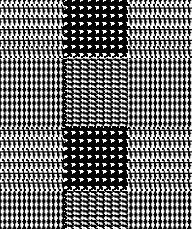 Houndstooth, pepita and vichy are two-tone checked patterns made from square blocks of color, which are created by stripes of equal width in the warp and weft directions. In the fashion press, on the Internet and in various specialist books, the terms are handled inconsistently and are sometimes used synonymously and sometimes contradictingly.

Houndstooth is created with plain weave fabrics when the warp and weft each have two-thread-wide stripes. The meeting of white warp threads with black weft threads creates the impression of tiny windmills. Are there more than two threads of the same color next to each other, e.g. B. 6 or more, a Vichy or block plaid is created .

Pepita is created when warp and weft strips, usually eight threads wide, are woven twill, typically as a 2/1 twill. Those blocks in which white warp threads meet black weft threads appear diagonally striped. If the same warp is woven in plain weave, a Vichy or block check is created from pure white, pure black and - depending on the thread count and distance - with a checkerboard pattern or blocks that appear evenly gray. The pattern is used in pepita trousers or chef trousers , a typical professional piece of clothing for the kitchen and bakery.

Vichy (as opposed to Vichy check) is woven twill like Pepita, but with wider twill ridges, e.g. B. in 2/2 twill with four threads wide black and white stripes, or as 3/3 twill with six threads wide stripes. As a result, when white warp and black weft threads come together, black and white diagonal stripes are created that are so wide that the blocks no longer appear to be clearly delimited, but merge with the neighboring blocks of the same color to form one form ("run over frog").

It is a classic pattern called "pinstripe" in Germany and "pinstripe" in Austria and Switzerland, and in which warp threads in contrasting colors are incorporated into a base fabric, which appear as fine vertical stripes. Mostly it is light warp threads in a dark base fabric of mostly dark gray or dark blue color. The pinstripe suit is often associated with upscale society, but is above all - mostly dark blue - the almost uniform men's clothing in international business life ( pinstripe suit ). 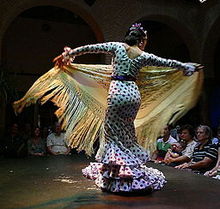 Flamenco dancer in a dress with a polka-dot pattern

Polka dots are a pattern of equally large, filled, regularly arranged circles. The dots are not woven, but printed on the fabric, sometimes also embroidered. The origin of the name is unclear; in particular whether there is a connection with the dance of the same name .

Originally, the pattern was mainly used in the costumes of flamenco dancers . It found its way into general fashion at the end of the 19th century. The polka dots experienced a particular surge in popularity in 1926, when Miss America won in a dotted bathing suit. They have also been a trademark of Walt Disney's Minnie Mouse since the animated film Steamboat Willie .

The polka dots are now mainly used on dresses , swimsuits , in children's fashion as well as on ties , scarves and other accessories . The pattern was also mentioned in the title of the 1960 song Itsy Bitsy Teenie Weenie Yellow Polka Dot Bikini by Brian Hyland .