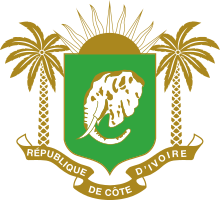 Government N'Gbo Aké was an internationally not recognized government of the Ivory Coast . It was formed in the wake of the government crisis 2010/2011 on December 5, 2010 by Gilbert Marie N'gbo Aké on behalf of Laurent Gbagbo . Due to the conflicts surrounding the second round of the 2010 presidential election , it existed in parallel with the Soro III government, which had been put together shortly before, also on December 5, by Guillaume Soro on behalf of Alassane Ouattara . The Aké N'Gbo government became obsolete on April 11, 2011 with the arrest of Gbagbo.

Almost the entire government was affected by European Union sanctions as of January 11, 2011 . Its members were not allowed to enter the EU and their funds were frozen.

Members of the N'Gbo Aké government