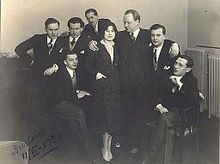 Robert Biberti (standing, second from left) with the Comedian Harmonists 1930

In 1914, when he was twelve, Biberti was expelled from school and trained as a wood carver with his father. Biberti's father of the same name, Robert , once a famous opera singer , had previously ruined his voice through alcohol and an unhealthy lifestyle. However, he aroused the son's interest in music: Biberti sang in operas and theaters. He finally met Roman Cycowski and Ari Leschnikoff , two other members of what would later become the Comedian Harmonists, in Berlin's large theater .

Biberti's grave in the Wilmersdorf cemetery

In response to a newspaper advertisement, he appeared in 1927 to audition in Harry Frommermann's apartment in Berlin-Friedenau , Stubenrauchstrasse  47. Both had a love for the sound of American Revelers . They decided to found a similar but German-speaking ensemble: the Comedian Harmonists . In 1941, after the ensemble broke up after the Jewish members emigrated and the subsequent re-establishment as a master sextet, Biberti was drafted by the Berlin air raid warning center.

Robert Biberti had  an apartment with eight rooms, including a rehearsal room and secretariat, in the house at Carmerstrasse 11 in Berlin-Charlottenburg from 1931 to around the mid-1950s.

In 1944 he married Hilde Longino. Between 1950 and 1980 he ran an antique shop and wrote articles about the Comedian Harmonists for the radio . He could not make a living from these activities alone. He did this through the royalties from the Comedian Harmonists publications, which he paid off in full. While Frommermann fought for his share of the royalties after his return to Germany , Leschnikoff died completely impoverished despite numerous petitions to Biberti. He had given him his rights in 1939 to pay off debts he owed to Biberti.

1973 Biberti accepted the actress, director and author Ilse Biberti as his nominal daughter. In 1985 he died of kidney failure at the age of 83 and was buried in the Wilmersdorf cemetery.

Robert's brother Leopold Biberti (1894–1969) worked as an actor in Austria and Switzerland.