from Wikipedia, the free encyclopedia
Battle of Basra
Part of: Mesopotamia Front , World War I 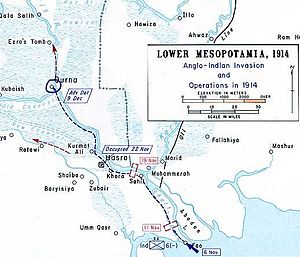 The Battle of Basra was a battle on the Mesopotamia Front of World War I that was fought between British and Ottoman troops south of the city of Basra in what is now Iraq in November 1914 . It ended with an Ottoman retreat and the capture of Basra by the British.

After the successful landing at Fao and the shutdown of the coastal batteries there , British ships penetrated the Shatt al-Arab in order to explore a suitable landing site as a starting point for further operations. On November 8th they began unloading the 16th Brigade of the 6th (Poona) Division under General Delamain near Saniyeh. The Ottoman troops in the area, meanwhile, rallied at Basra. Delamain decided, in anticipation of the arrival of further troops, to forego his own offensive actions and to limit himself to the protection of the Abadan oil refinery .

On the morning of November 11, an Ottoman detachment of around 600 men attacked the outposts of the British camp at Saniyeh, but had to withdraw after losses.

On November 14, India's 18th Brigade, with Division Commander Arthur Barrett , arrived at the landing site. The British now had two infantry brigades, several batteries of artillery and a few squadrons of cavalry. Support came from the two armed sloops Odin and Espiegle . Barrett's instructions were to make a push to capture Basra after his troops were completely unloaded. On November 15, a British advance division of several battalions led by Delamain attacked the Ottoman camp at Saihan, some four miles from the British camp, and forced the Ottoman troops, estimated at around 3,000 men, to give up their positions.

On November 17, the British began their advance on Basra, having already been informed by a local sheikh that the Ottomans had moved into new positions on the Zain-Sahil line. The Ottoman troops, some 3,500 regular soldiers and 1,000 Arab warriors, had dug themselves in on a front of about three miles between the mosque of Zain and an old brick fort near Sahil. After a fierce battle lasting over an hour, the Ottomans were driven from their positions.

Since the British had to expect to meet the main Ottoman power further upstream at Balyaniyeh, they set up camp for the time being and looked after the wounded, began to land supplies and cleared up the enemy positions further upstream. On November 21, Barrett received the news that the Ottomans had since given up not only Balyaniyeh but also Basra and were retreating along the Tigris to Amara . There is a risk of looting and rioting in Basra. Barret then ordered the demolition of the camp. Two battalions were loaded onto river steamers and sent ahead with the two sloops to Basra, which they reached on the morning of November 22nd. A parade was held in the city on November 23 and the British flag was hoisted in the presence of local diplomatic officials.

With the conquest of Basra, the British had achieved their main goal of effectively shielding the Abadan oil plants against further Turkish attacks. As a result, the British concentrated on securing their position, which among other things led to the battle of al-Qurna in early December. The Ottoman leadership began to realize the importance of the Mesopotamian theater of war only late. However, the attempt to recapture Basra by the Ottoman Empire using newly deployed troops failed in April 1915 in the Battle of Shaiba .