The periodically recurring changes in the female sexual organs in mammals are referred to as the sexual cycle, also known as oestrus cycle . It begins with sexual maturity and continues until death. The exception is the menstrual cycle of women in humans with the absence of menopause . It is interrupted by pregnancy or illness.

There are four phases of the cycle: Proestrus, estrus, metestrus and diostrus. In the more recent literature, due to the Anglo-American influence, an “e” is written instead of the “ö”, i.e. Proestrus, Estrus etc. 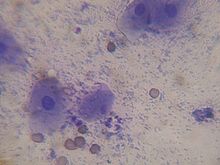 Vaginal cytology in a bitch in the prostrus: erythrocytes and intermediate cells dominate .

The proestrus , referred to as "Vorbrunst" usually lasts only 2 days. Here, depending on the species-specific number of boys, one or more follicles of the egg cells grow in the ovary . The lining of the uterus thickens, the glands grow. It is noticeable in dogs that erythrocytes migrate ( erythrodiapedesis ) and a bloody vaginal discharge sets in.

The oestrus (from ancient Greek οἶστρος , sting, tantrum ' ) - German also "Brunst" or " Runft " - is the section in which the female animal is ready to mate, it also lasts only a few days. The ripe follicles ( Graaf's follicles ) develop in the ovary and follicle rupture (ovulation) occurs towards the end of the estrus . In some species, ovulation is triggered by mating ( provoked / induced ovulation ), e.g. B. in rabbits and cats. In the uterus , the growth of sets mucosa continue the external os is in the cervix ( cervix uteri formed) mucus visible. Shortly before and during ovulation or ovulation, the estrogen level increases significantly, which means that the vulva is also supplied with blood ( hyperemic ) and appears thickened and reddened. In addition, the female releases pheromones , which trigger the mating instinct in the male .

In dairy farming, among other things, pedometers are used to measure the increased activity of the animals during heat (when the follicle ruptures) and to evaluate it using a herd management program . This allows the time for insemination of the animal to be controlled more precisely. But there are other ways to recognize heat, for example by measuring the basal temperature heat detectors or the electrical resistance of the vaginal mucosa.

The metoestrus ( "Nachbrunst") is the time to alleviation of all oestrus and also takes only a few days. At the ovary itself starts from the Follikelrest luteum (corpus luteum) to form. In the uterus , the glands are fully developed and, under the influence of progesterone, begin to produce a strong secretion .

The diostrus ("intercross") depends on whether fertilization and thus pregnancy has occurred . The length of time varies greatly depending on the species and length of the cycle and varies between 10 ( horse ) and 75 days ( dog ). First, the corpus luteum forms on the ovary to full bloom. Without fertilization, the corpus luteum regresses after 15 to 20 days under the influence of prostaglandin F2α . The intense secretion continues in the uterus , but without pregnancy the glands and mucous membrane recede after a few days .

Breaks between the cycles are called anestrus.

The duration of the cycle is around three weeks for most pets. In the dog it lasts an average of 31 weeks (16–56) weeks, in the cat there is also a large variation (2–7 weeks). In rodents, the cycle usually lasts only a week.

The sequence of the sexual cycles behaves very differently in the individual animal species. One differentiates according to the frequency