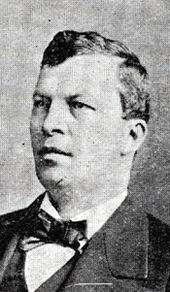 Simon Peter Wolverton (born January 28, 1837 in Rush , Northumberland County , Pennsylvania , †  October 25, 1910 in Sunbury , Pennsylvania) was an American politician . Between 1891 and 1895 he represented the state of Pennsylvania in the US House of Representatives .

Simon Wolverton attended his home public schools and Danville Academy . In 1860 he graduated from Lewisburg University , now Bucknell University . Between 1860 and 1862 he served as principal the Sunbury Academy . After studying law and his admission to the bar in 1862, he began to work in Sunbury in this profession. Shortly afterwards he set up a company and became its captain. In the following years he served in the army of the Union during the civil war . After the war he embarked on a political career as a member of the Democratic Party . He was a member of the Pennsylvania Senate in 1878, 1880, and 1884 . In 1884 he was an unsuccessful Democratic candidate for the US Senate elections .

In the congressional elections of 1890 Wolverton was elected to the 17th  constituency of Pennsylvania in the US House of Representatives in Washington, DC , where he succeeded Charles R. Buckalew on March 4, 1891 . After a re-election, he was able to complete two legislative terms in Congress until March 3, 1895 . In 1894 he renounced another candidacy. After serving in the US House of Representatives, Simon Wolverton returned to practice as a lawyer. He died on October 25, 1910 in Sunbury, where he was also buried.