The title of this article is ambiguous. Further meanings are listed under Sipahi (disambiguation) . 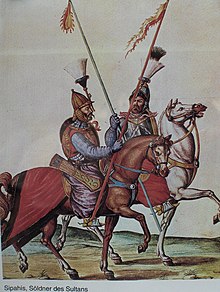 Sipahi ( Persian سپاهی Sepāhī , soldier, cavalry, in India Sepoy ) or Spahi were called in the Ottoman Empire theriders to be providedby the holders of the Turkish warriorfiefs,the Tımars and Zaims.

For their lands the red-cloaked Sipahi had to serve as mounted soldiers in the Sultan's army. The Sipahi detachments were a core force of the Ottoman army from the 14th to the 16th centuries . If one imagines the Ottoman army as a crescent moon, then the sipahi were placed at the tips of this crescent moon. From there, these cavalry troops were to encircle the enemy and press them against the base of the army. The foot soldiers of the army, the Janissaries , were stationed at this base .

Sipahi has been around since the beginning of the 14th century. The Ottoman rulers began to reward their warriors with the award of conquered lands. The Sipahi received a relatively small estate, some of which he managed himself in the early days. Other parts were ordered for him by the peasants of the subjugated peoples ( ra'āyā = "those protected by the ruler", subjects).

In return, the Sipahi were obliged to go to war for the Sultan whenever he asked them to. The Sipahi had to finance their own equipment and horse. Depending on the size of their tımar, they had to provide up to seven auxiliary soldiers (cebeli) . The Sipahi had to equip his cebelis , train for battle and lead in battle. At the beginning of the 16th century, the core of the Ottoman army consisted of around 40,000 Sipahis and 60,000 Cebelis. With this system, the sultans succeeded in raising armies that were considerably larger than their Christian opponents.

In contrast to the European feudal system , the Sipahi were not allowed to bequeath their Tımars or pass them on to third parties. Each Tımar was issued directly by the Sultan to the individual warrior and then remained in the hand of the respective holder, who had to provide the military service for it. In this way, no feudal aristocracy could develop in the Ottoman Empire , which as a ruling class with its own vassals stood between the sultan and his warriors.

The decline of the Sipahi

The collapse of the Sipahi system had economic and military reasons.

In the 16th century there were still almost 130,000 men (Sipahi and Cebelis) available, in the 17th century there were only 30,000. The increasing importance of infantry and artillery in the European military system of the 16th century made the Sipahi cavalry troops increasingly unsuitable. The sultans therefore focused their attention on the janissaries , who now constituted the most important part of the army. In addition, the Ottoman Empire had reached the zenith of its power. Hardly any new countries were conquered in which Tımars could be set up. Likewise, the large booty often obtained beforehand, which had made up a substantial part of the Sipahi's income, was missing. Finally, economic crises led to a decline in income from the Tımars. At the same time, however, the cost of equipment (firearms) rose. Accordingly, the inclination and ability of the Sipahi to perform their services properly decreased. The quality of the equipment declined and many Tımar owners tried to evade military service, which they succeeded because of increasing corruption and mismanagement in the Ottoman administration, which made it impossible to control the Tımar owners. Especially in the 17th century, Sipahi sold or leased parts of their Tımar to large landowners without the High Porte intervening. Others inherited the Tımar, and the authorities often "forgot" to demand military services from the heirs. In this way this system deteriorated more and more.

The Cebeli , former followers of the Sipahi, became irregularly paid units that could never replace their former masters in terms of combat strength and discipline, but nevertheless consumed large amounts of wages.

Under Selim III (1789–1807) there were only about 2,000 Sipahi left. But the designation was retained in many Arab-African states for cavalry troops.

After the conquest of Algeria , Sipahi regiments, known there as Spahis , were founded in the French army , and they continued to serve in oriental costumes in Algeria and Tunis in the 20th century . They were properly organized and trained. Officers and some of the NCOs were always French nationals. The Sipahis were still fighting the " Third Reich " in World War II . Some of these troops were able to move to Switzerland in May / June 1940 and were interned there until 1941.

In the post-war period, the Spahis were motorized as light tank reconnaissance aircraft . After the end of the Algerian War in 1962, three of the four Spahi regiments were decommissioned. The last Spahi regiment, the 1er Spahi, was stationed in Speyer until 1984. The extensive barracks complex now houses the Speyer Technology Museum . Today the regiment that took part in the Gulf War is stationed in Valence in the Rhone Valley .

The Turkish Wars of the 16th, 17th and 18th centuries occupy a large part of the exhibition in the permanent exhibition of the Vienna Army History Museum . Numerous objects are open to the public, including reflex bows , arrows , quivers , riding accessories and graphic representations of the Sipahi.

In the adventure novel The Count of Monte Christo by Alexandre Dumas , two of the secondary characters, Maximillien Morrel and later Albert de Morcerf, belong to the units of the French Spahis in Algeria, which are characterized by particular bravery.