The St. Aegidien Church is a neo-Gothic town church in Oschatz in Saxony , which was built by Carl Alexander Heideloff from 1846 to 1849 as a profound reconstruction of a medieval church .

It belongs to the municipality of Oschatz in the Evangelical Lutheran Church of Saxony and is used not only for the community but also as a meeting place for inter-congregational events and concerts. It is by far the largest church in the church district and shapes the cityscape of Oschatz with its two towers.

The origin of the church, which was consecrated to St. Aegidius , is probably in the 11th century (chapel / wooden church).

The oldest components, enclosing walls, pillars and some other architectural elements of today's church come from an early stone church building in the 14th century. This older church was completely destroyed during the Hussite invasion in 1429.

The new building took place from 1443 in the Gothic style, with two towers. In 1464 the Gothic crypt was built under the altar arch. It has the shape of an octagon and arches in a star shape over a squat central column. It was accessible from the outside, but was never used for worship services.

After the city fire of 1842, today's stately building was built in the years 1846 to 1849 as a largely new building in the neo-Gothic style with its two 75.73 meter high towers under the direction of the Nuremberg builder Prof. Carl Alexander Heideloff. Ornate Meissen stained glass (altarpiece) adorn the interior of the church. The altar and pulpit were also designed by Heideloff.

The tower keeper's apartment was inhabited until 1970 and can be visited. In 1912, major repair work was carried out on the church. In 1987 the church was structurally in a very poor condition. For safety reasons, loose sandstones were removed from the towers. In the absence of suitable scaffolding for the demolition work, the mountaineers from the BSG Medizin Wermsdorf took over this work. Bernd Voigtländer from Oschatz and Alfons Rosenberger from Wermsdorf led the rope team on the towers.

On May 8, 2005, the Aegidien Church was reopened after extensive construction work. At this time, among other things, the roof was covered and the interior of the church was repaired. The construction work on the entire structure continued. In 2008 the outer facade of the apse and the crypt under the apse were completed. From 2008 to summer 2009, the two spiers had to be renovated again. The sandstone was impregnated up to 8 centimeters deep with special preservatives. At the same time, to complete the construction work, the eight pegs (4 pegs per tower) were poured. Here, attention not only had to be paid to the original Heideloff design, but also to the original color. In addition, there were increased demands on the stability at a height of over 40 meters. This work was also completed on October 3, 2009, the last after 22 years of construction. 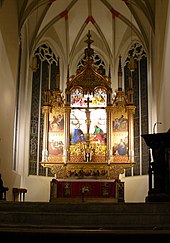 Altar of the St. Aegidien Church

The entire chancel is the oldest preserved part of the church, as evidenced by the number 1464 on one of the buttresses of the church. The nave is a three-aisled, five-bay hall church and has profiled pillars. The vaults of the nave were supplemented by Heideloff, while the star and cross-ribbed vaults were preserved in the elongated main choir and in the two side choirs.

The altar shows Jesus' Last Supper in the predella, above which rises a large leaded glass window instead of a central shrine as an extraordinary solution . It depicts the happenings on Good Friday. The morning sun gives the ornate biblical representation special symbolic power. The cross comes from the cemetery church. The pulpit with richly carved tracery ornamentation is also based on a design by Heideloff. The painting above the triumphal arch by Carl Heinrich Hermann from Berlin shows Christ teaching.

The baptismal font of the St. Aegidien Church has the shape of a chalice, the eight sides of which are decorated with crossed keel arch ornaments. The organ gallery with rich tracery parapets is also noteworthy.

The organ is the work of the well-known Saxon master organ builder Carl Gottlieb Jehmlich from Zwickau . It was inaugurated in 1851. Advanced sent by the company in Jehmlich in 1933 Dresden and since then has three manuals and Pedal with 57 registers and 3772 pipe on abrasive loading and cone charging with electric action . This gives it an unusual size and a special richness of sound.

A no longer existing organ was built in 1627 by Heinrich Compenius the Younger . Between 1802 and 1811 the composer Carl Gottlieb Hering was the organist at the St. Aegidien Church.

View of the belfry and four bronze bells

The ringing consists of four bronze bells and one bell, the bell cage is made of oak wood, as are the bell yokes. Below is a data overview of the bell: