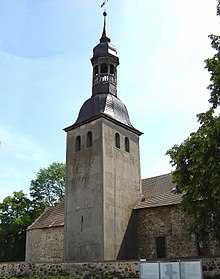 The St. Petri Church is located in the Leitzkau district of the city of Gommern in the Jerichower Land district in Saxony-Anhalt . In the local register of monuments , the church is listed as an architectural monument under registration number 094 41484 . It belongs to the Evangelical Parish Leitzkau-Ladeburg in the Elbe-Fläming parish of the Evangelical Church in Central Germany .

Bishop Hartbert von Brandenburg consecrated a church made of quarry stone in Leitzkau in 1114. A few years later, in 1139, a Premonstratensian choir was established at this church , which was soon elevated to the rank of cathedral chapter . Extensive alterations to the church took place between the beginning of the 17th and the middle of the 18th century. During these renovations, the aisles were demolished and an extension for a gallery staircase was added to the south of the west hall. The Romanesque windows were bricked up and larger windows were designed in their place. The southern transept was redesigned as a mansion box. A sacristy was added to the eastern part of the choir. The flat wooden ceiling was replaced by a wooden barrel vault. In 1740 the tower received its domed dome and raised lantern.

The church served as the burial place for numerous members of the von Münchhausen family .

The St. Petri Church is now a station on the Romanesque Road .

The Romanesque building was designed as a three-aisled pillar basilica with a cross-shaped floor plan. For the outer walls, as was later the case with the collegiate church , Grauwacke quarry stones from the area were used. The northern part of the transept was provided with a tower. The original building already had a gallery on the west side.

The church furnishings come from the 18th century. According to the inscription, only a hexagonal baptismal font was made of sandstone in 1620. The incised tombstones from the 13th century and the partially exposed medieval floor in the church are also worth seeing. Other sights include a chimney with a stucco relief in the sacristy, the pulpit altar, the choir stalls and a larger-than-life wooden triumphal crucifix as well as the incised tombstone of a married couple (1367).