The Münchhausen family originally lived in what is now Lower Saxony , later also Saxony-Anhalt , and was first mentioned in documents in 1183. The parent company was in the desolate Munichehausen settlement near Rehburg in the former principality of Calenberg .

The family appears for the first time in a document in 1183 with dominus Rembertus, pater Gyselheri de Monechusen , with whom the family line begins. The eponymous headquarters was in the deserted settlement of Munichehausen on the Haarberg between the present-day towns of Rehburg and Winzlar near the west bank of the Steinhuder Meer .

According to the document from 1183, Giselher, son of Rembert, was the first to take up residence in Monechusen (Munichehausen) and named himself after this place. In 1163 the nearby Cistercian monastery Loccum was founded by Count Wilbrand I of Loccum-Hallermund . It therefore seems possible that at about the same time a permanent house with a corresponding guard was set up to protect the monks and that either the monastery founder or the bishop of Minden installed the named Giselher there as ministerial . In his gender history from 1740, however, Treuer suspects that the place derives its name from an older monk's court, which a Minden monastery had already founded and occupied with monks. The fact that no fiefdoms have been renewed for the headquarters in later generations suggests that it was an allodial property from the start .

Gottlieb Samuel Treuer, who drafted a family tree in 1740, rejects a connection with a place and gender of Münchhausen mentioned in Corvey Abbey in 889 as speculative. Lenthe / Mahrenholtz , however, consider a community of descent with the noble lords von Slon, von Vornholte and von Hademstorf from the southern Lüneburg Heath as very likely, since the three main names Rembert , Justatius and Giselher have been documented in these (later extinct) families since 1127, which correspond exactly to the names of the first five generations of the Münchhausen family. Both Rembert II, son of the first mentioned Giselher, and his sons Giselher II. And Justacius I (the two founders of the white and black lines) were castle men and bailiffs at the ducal moated castle Sachsenhagen around 1260–1297 .

The "Villa Monickhusen" is mentioned for the last time as an inhabited settlement in 1335; either through warlike destruction or a flood or the plague of 1348/49 it soon became desolate. The castle lords' own church remained in existence for a while, however, since in 1386 Heiniko von Münchhausen gave her some properties from the estate of his Honhove (high court) there to support her. In 1555 the church fell into disrepair when Clamor von Münchhausen assigned the same lands to the first Protestant pastor of Rehburg. Furthermore, Clamor built a moated castle in Brokeloh on the associated lands in 1545 - allegedly using stones from the Münchhausen castle and church ruins , where he felt safe from the dangers of a campaign in a difficult-to-access place in the moor. His son Erich-Hans completed the building around 1600, but went bankrupt two years later and had to sell the property, as well as the fiefdoms in Nordsehl and Lüdersfeld near Stadthagen, which the family has documented since 1269 .

Already in the middle of the 13th century, the sex was divided into a black and a white line , both of which still exist today. In the high and late Middle Ages, the Münchhausen Burgmannen , who lived in the towns and villages of Schaumburg to administer the count's fortresses, Burgmannshöfe , of which those in Lauenau - with the associated Apelern - (since 1377) and Stolzenau (since 1378) have remained in family ownership to this day. From the 14th century official and drosten posts were occupied and sovereign pledged goods were acquired, such as Rehburg Castle (1387–1586), Aerzen Castle (1508 - late 17th century), Grohnde Castle or the Amtshof in Steyerberg (1549–1586) 1766), which mostly fell back after a few generations through redemption.

In the 16th century, the family achieved a great material boom thanks to some successful mercenary leaders , i.e. independent military entrepreneurs, who supplied the armies of their princely employers with contractually agreed contingents of war people for fixed sums, in particular Hilmar von Münchhausen (1512–1573), his brothers and Cousins ​​were brought in for this. With rich wages and spoils of war, he was soon able to acquire one property after another, partly as a fief, partly as a pledge, thus laying the foundation for the considerable wealth of his descendants. He and his sons, Hilmar the Younger and Statius , furnished some of the estates with magnificent castles of the Weser Renaissance that are still culturally and historically significant , such as Schwöbber , Bevern , Wendlinghausen and Leitzkau , while the cousins ​​from the white Apelern line, the Münchhausenhof in Hessisch Oldendorf who built the Remeringhausen manor and Schwedesdorf Castle in Lauenau.

With Hilmar's acquisition of the former Premonstratensian Canons of Leitzkau near Magdeburg in 1564, the family soon formed a second focus on the Elbe - in addition to their ancestral home in the Schaumburger Land and the Weser Uplands to the south - with the "Althaus" and Hobeck lines formed in Leitzkau in 1679 and "Neuhaus" divided ownership. Weddings led to kinship with families in Brandenburg, Saxony and Thuringia, such as the Bismarck , Quitzow , Selmnitz , Schulenburg etc., which also led to the expansion of ownership through inheritances or acquisitions (1686 Steinburg , 1706 Straussfurt - where the Hanoverian Prime Minister Gerlach Adolph von Münchhausen again undertook a large castle building -, 1730 Herrengosserstedt ). In Lower Saxony, the black line acquired the Bettensen estate in 1764 , Moringen in 1739 , Hedwigsburg in 1769 and Groß Vahlberg in 1776 . In the 19th century, Niederschwedeldorf and Eisersdorf in the Silesian county of Glatz , Windischleuba (in Thuringia), in the early 20th century by marriage, Gut Rosenkrantz near Kiel (Schleswig-Holstein), Nausitz (Thuringia) and Vitzenburg Castle (Saxony-Anhalt) added.

In 1945 the Central and East German possessions were lost due to the land reform ; Some of the properties in Lower Saxony were inherited from the family in the 20th century (Remeringhausen, Nienfeld , Moringen, Parensen , Rinteln ) or through sales (Schwöbber, Hessisch Oldendorf), while six properties have been held to this day. In some cases, parts of the expropriated property were also bought back after reunification. So belong to the family u. a. again parts of the former forestry areas of Vitzenburg Castle , as well as the associated vineyard including the baroque pavilion. A Münchhausen family crypt is located in the Kemnade monastery , which also houses the grave of Hieronymus Carl Friedrich (1720–1797) , and another as an extension to the Apelern church .

The representatives of the black line held the office of Hereditary Marshal of the Principality of Minden from 1433 to 1618 . In contrast to the widespread assumption within the family that the Leitzkau lordship was acquired by Hilmar von Münchhausen in 1564 as free (not fiefdom-bound ) property and that his descendants therefore carried the title of baron on various occasions without a formal elevation to the imperial baron class , as evidenced by numerous Kurbrandenburg and Prussian loan letters that Leitzkau was a loan. It was not until 1717, it was like any other Lehngüter of Brandenburg on the instructions of King Friedrich Wilhelm I, a allodial, but of which four Lehnpferde provided or as the equivalent of an annual 160 dollars Lehngelder be paid to the county Zauchische fund had. Most of the lines in the house were confirmed in the 19th century by rescripts of the royal Prussian heraldry (from 1861, 1888 and 1898) that had been used by some family members on their own initiative since the late 18th century .

In the 13th century, the first names Johann (es), Heyno (Heineko, Heynecke) and Cord (Conrad) were added to the three original leading names of the family in the 12th century, Rembert , Giselher and Justatius (Statius) (the latter through the married-in Daughter of a Cord von Broke); since the 14th century Ludolf and Gerlach and from the 15th century Liborius (Börries) (through the daughter of a Borries von Widen) as well as Ernst (through the sister of an Ernst von dem Bussche ) and Clamor (through the daughter of a Clamor von Reden ) . The name Hilmar appears for the first time with the well-known Colonel Hilmar (* 1512), who was named after his maternal grandfather Hilmar von Oberg . The name Friedemann comes from the von Selmnitz family . These first names are still in use in the family today.

The family coat of arms shows a striding, half-right turned Cistercian monk in a white robe with a black scapular , in his right hand a red crook, in the left a red book bag. On the helmet with the black and yellow blankets the monk. Their clothing has different tinctures depending on the line. 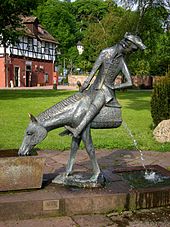 Coat of arms white line , board in Hermann Grote: Book of gender and coat of arms of the Kingdom of Hanover and the Duchy of Braunschweig , Verlag Carl Rümpler (Hanover 1852)