The term herald's office is derived from the herald and denotes state authorities that are or were responsible for looking after all matters relating to nobility (questions of nobility, rank and coat of arms ). 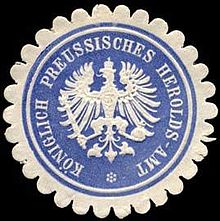 The Royal Prussian Herald office for the first time in 1706 as a top Herold Office established, but was already 1713/1714 again. On March 14, 1855, it was re-established in Berlin as a nobility authority and finally dissolved on March 31, 1920. In addition to various concerns of the nobility, the municipal heraldry , i.e. the award of city coats of arms , was also the responsibility of the heraldry. It also decided on the use of the royal coat of arms. His files came to the Secret State Archives in Berlin-Dahlem in 1920 .

The royal Bavarian Herald office, later imperial herald office , was established in 1808. Since 1809, the Bavarian was Adelsmatrikel out that after 1918 at the Bavarian State Archives in Munich arrived.

In the Kingdom of Saxony , the “Committee for Nobility Matters” was established at the Ministry of the Interior in 1902, which was only converted into the Herald's Office in 1918. His nobility register with files and library came in 1919 to the “Saxon Foundation for Family Research” in Dresden .

In the Kingdom of Württemberg , register-based registers of the nobility have been created since 1818.

The historical herald's offices have been abolished in Germany. The coat of arms registers are continued today by the heraldic associations . In needle legal today Questions acting at the request of the nobility Legal Committee which is no longer since 1919, public , but private is right. However, this is still based on the principles of Salic law, which has been used for around 1000 years .

In the Anglo-American countries in particular, state registers of coats of arms ( Heraldic Authority ) have been preserved. Often this is a Heraldic Society ( Heraldic Society ) to coordinate scientific advice. The name of the English heraldry as "College of Arms" is often used synonymously for the respective coat of arms authority of the country.

Representations in the feature film

In the James Bond film On Her Majesty's Secret Service , Bond discovers the correspondence between the villain Blofeld and the British College of Arms. He then pretends to be one of the thirteen officers of the college in order to get in touch with Blofeld.