Church of St. Michael in Reichenbach 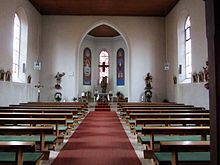 The Roman Catholic branch church St. Michael is the village church of Reichenbach , a district of Münnerstadt in the Lower Franconian district of Bad Kissingen . It is one of the architectural monuments of Münnerstadt and is registered under the number D-6-72-135-188 in the Bavarian monument list .

The common parish church of St. Michael for the villages of Burghausen and Reichenbach, which was located on the 401 m high Michelsberg, was destroyed by lightning in 1806. The two villages initially continued to use the walled cemetery on the mountain. In 1830, cemeteries were created in Burghausen and Reichenbach. In 1860 the church of St. Michael in Reichenbach was rebuilt in neo-Gothic style.

The church tower stands north in the central axis of the nave. A Marian grotto is built on the east side of the church tower . The three-eighth choir is in the south. The sacristy is built on the west side of the choir. The nave has three window axes, the choir three windows. The side windows of the nave and the windows of the choir are geometrically designed differently, but all contain red color elements. The church does not contain regular altars. There is a modern tabernacle column in the choir . To the left of the pointed choir arch is a figure of St. Michael , to the right of it a gilded figure of St. Mary . In the middle of the east wall of the nave there is a figure of St. Joseph with baby Jesus in his arms and two lilies, opposite a figure of Jesus. The one-manual organ on the northern gallery (10 registers) was built in 1860 by Johann Caspar Schlimbach from Bad Königshofen and renovated in 1994 by Michael Stumpf from Bad Kissingen .