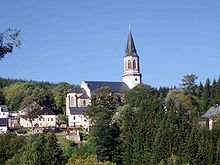 View from the east

Painting by Johann Georg Gottschald, stolen from the church in 1991

The Evangelical Lutheran town church in Johanngeorgenstadt is a neo-Gothic hall church in the Saxon Ore Mountains .

After the original church, built between 1655 and 1657 as part of the founding of the exile town of Johanngeorgenstadt, with a tower built between 1687 and 1710, was destroyed in the city fire on August 18, 1867, a new church building was erected at the same location from 1869 to 1872. The old tower masonry was used for the new building under the direction of the Annaberg architects Arnold and Pfau.

On the night of November 19-20, 1991, a theft occurred in the town church, in which two portraits of the hammer gentleman Johann Georg Gottschald and his wife, painted on tin-plated sheet iron, were stolen.

The plastered building with a retracted, three-sided closed choir has a mighty north tower and a recessed octagonal upper floor with a pointed helmet covered with dormer windows. On the flanks of the choir and tower there are two-story extensions with a sacristy and access to the galleries.

The cross-rib vaulted hall with five bays has a choir in the width of the central nave and galleries in the side aisles that are clamped between bundle pillars. The life-size paintings of the apostles in the choir are designed as portraits of citizens of the city. In the side aisles there are representations from the history of the Johanngeorgenstadt exiles, which, like the choir painting, were made by A. Herrmann in 1927. The same artist created the mural of a Pietà above the entrance of the tower hall, which was designed as a memorial hall for the fallen. The neo-Gothic furnishings have been preserved from the time the church was built. The altar painting donated by Gendarmerie Chief Inspector of Cerrini di Monte Varchi was possibly created around 1800 by the hand of Johann Carl Rößler from Dresden and depicts the appearance of the angel in front of the three Marys at the empty grave and leads from classicism to the style of the Nazarenes . The three large stained glass windows were created in 1899 based on designs by Josef Goller and depict the Last Supper in the middle and the Nativity and the Noli me tangere scene to the side. The stained glass windows in the side aisles were made in 1902 based on designs by Urban & Goller and feature depictions of the apostles and ornamental paintings. The organ, built by Urban Kreutzbach's sons, was built in 1872. The two memorial stones on the inside above the entrance were made in 1655 and 1704 and come from the first church. In the side aisle there are also two identical grave slabs from 1671 and 1686 for Maria Rosina Kircheisen and the butcher Martin Roth.

The first previous bell from around 1657 consisted of three bronze bells and was destroyed in the town fire on August 18, 1867. The new church, consecrated on August 27, 1872, received a new bell from the Hermann Große bell foundry in Dresden. The bell is still in its original state today, because it was classified in group B in both world wars and therefore did not have to be given as a metal donation . The following is an overview of the data on the bell from 1872 to today:

The following people were buried in the town church: