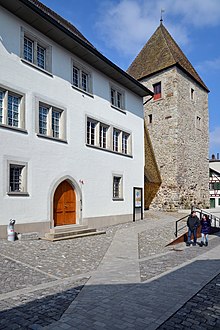 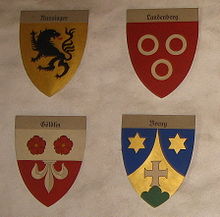 Series of coats of arms in the entrance area - Lords of Russikon, von Landenberg , Göldlin and Breny

Interior view of the Breny House

Western city fortifications with Breny Tower, intermediate tract and Breny house, from the Giessi seen from

Intermediate wing of the city museum

The Rapperswil-Jona City Museum was founded in 1943 as the “Rapperswil Local History Museum”. It is housed in the Breny House and the tower of the same name on Herrenberg in the heart of the old town of Rapperswil , a district of the Swiss municipality of Rapperswil-Jona in the canton of St. Gallen .

Under the patronage of the Rapperswil-Jona Tourist Association, parts of the Paulina and Heinrika Breny property were established as a local museum of local history and art in 1943 . The property (Obere Halsgasse until 1960) came into the possession of the local community of Rapperswil-Jona in 1958 as a legacy of the Breny siblings . The names Breny House and Breny Tower have been common ever since.

Use and location were checked in 2008/2009 as part of the “Janus” project, the results were presented to the public and submitted to the residents of Rapperswil-Jona for voting in December 2009. The city museum was renovated from January 2010 to October 2012 and has since been closed to visitors. The intermediate wing in need of renovation was demolished, replaced by a functional new building and fitted into the historic street scene between the parish church and Engelplatz . The distinctive new building of the intermediate wing serves both as an exhibition area and to provide access to the Breny House and Breny Tower. The north side, which dominates the cityscape, remained unchanged.

Half of the investment and operating costs of around CHF 5.6 million are borne between the local community and the political community of Rapperswil-Jona. Simultaneously with the implementation of the Janus project , the maintenance work on the facades, windows and roofs of the historic buildings and the city wall was started at the expense of the local community's budget. The museum's exhibition has been renewed according to the latest findings and is currently presented year-round.

The main focus of the collection is, in addition to temporary exhibitions, prehistoric and Roman excavation finds from the lake area and in particular from the extensive excavations near Kempraten , the former Roman settlement Centum Prata . These exhibits are now accessible in the Canton Museum in St. Gallen. Other exhibits include medieval coats of arms of the city of Rapperswil, a drinking bowl from Countess Elisabeth von Rapperswil , a late Gothic hallway and sacred goldsmithing , including the miter , the crook, the cross-particle monstrance and pontifical objects from the monastery treasure of the Premonstratensian Abbey in Rüti in June 1525 Reformation was lifted.

The new intermediate wing houses the redesigned entrance area and temporary exhibitions as well as a city model (general view of Rapperswil around 1800), information on the city's history and fortifications as well as examples of the medieval Rapperswil trade, such as weapons, pharmacy, shoemaker's workshop and ceramic stove in the adjoining Breny House.

With the completion of the new building, the previous conventional presentation of the collection objects has given way to a " scenic didactic mixture of historical experience and information transfer ", key objects from the collection are presented " in the interplay of visual and acoustic implementations ", for example the local trade, exhibits on the history of Circus Knie and historical city views with multimedia presentations.