This article covers the standardization of a random variable. To standardize a statistical variable of a sample, see studentization . For the method of system analysis in the case of time-discrete signals, see z-transformation . 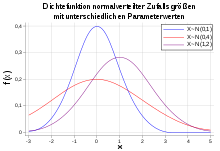 Under standardization (in introductory statistics courses it is sometimes referred to as z-transform hereinafter) is understood in the mathematical statistics , a transformation of random variables , so that the resulting random variable the expected value zero and variance one has. The standard deviation corresponds to the root of the variance and is therefore also equal to one. The standardized random variable is often called the z-score or z-value and forms a foundation for the construction of statistical tests .

Derivation of the mathematical formula

The following applies to the random variable obtained in this way :

In many statistical programs such as SPSS and Statistica , the option of standardizing the measurement results is already built in. Strictly speaking, one should speak of a studentization here, since the exact distribution of the underlying random variables is not known and therefore the arithmetic mean must be used instead of the expected value and the empirical variance instead of the variance . Often, however, the terms studentizing and standardizing are used synonymously.

The z-notation has historically been used for different purposes. Today it mostly stands for a standard normally distributed random variable. The variable and the term z -distribution were introduced in 1924 by RA Fisher in his work On a Distribution Yielding the Error Functions of Several Well Known Statistics .