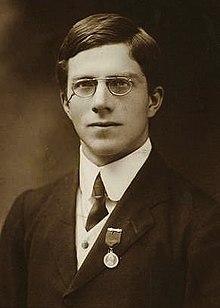 Fisher was born in London in 1890. He graduated from Cambridge University with a BA in Mathematics in 1912 .

On Fisher's initiative, the Cambridge University Eugenics Society was founded in May 1911 , of which Fisher became chairman and spokesman. He advocated eugenics and took what is sometimes referred to as positive eugenics , according to which upper classes should receive incentives for higher numbers of children; at the same time, members of other classes should not be prevented from doing so. His work on the errors in astronomical calculations, along with his interest in genetics, led to his work in statistics . From 1919 he worked at the Rothamsted Experimental Station . In 1933 he became Professor of Eugenics at University College London , and from there he moved in 1943 to the Balfour Chair of Genetics at Cambridge.

Ronald Aylmer Fisher was elected to the American Academy of Arts and Sciences in 1934 , the American Philosophical Society in 1941, and the National Academy of Sciences in 1948 . In 1950 he was one of the most prominent opponents of the UNESCO declaration "The Race Concept", which in his view interfered with science in a doctrinal way.

He received numerous awards for his work, e. B. 1938 the Royal Medal of the Royal Society . In 1952, he was by Queen Elizabeth II. The Knights defeated. In 1959 he received the Darwin badge . In 1960 he was elected a member of the Leopoldina . Retired, he spent some time in Adelaide, Australia, where he died in 1962.

Fisher led the maximum likelihood principle and the Fisher information and also the statistical method of analysis of variance ( English analysis of variance , in short, ANOVA ) is primarily attributable to him. He made significant contributions to the statistical design of experiments and postulated the theoretical concepts of sufficiency and freedom of distribution ( English ancillary statistic ). This made him one of the most important statisticians of the 20th century.

His article On a distribution yielding the error functions of several well known statistics presents Karl Pearson's chi-square distribution and Student's t-distribution in the same probabilistic framework as the normal distribution and the F- distribution named after him ( F for Fisher ). Fisher's book Statistical methods for research workers describes how these distributions can be used.

With The use of multiple measurements in taxonomic problems (1936) he introduced the Fisherman's discriminant function , which is the basis for the development of discriminant analysis .

Contributions to the theory of evolution

In his book Genetical Theory of Natural Selection , published in 1930 , he built on the work of Charles Darwin . He received support for the book from Leonard Darwin , Charles Darwin's son. In his book, Fisher showed how, within sexual selection, a sexual preference for a certain trait, even if it is only peculiar to a part of the population, generates increased selection pressure on this trait that goes beyond the selection pressure of natural selection. He called this a runaway process ( runaway selection ). In the final chapters of the book, he also hypothesized a relationship between the decline of civilizations and decreased fertility in the upper classes.

The rock band Fischer-Z was named after Fishers Z.