Szmalcownik [ ʂmalˈtsɔvɲik ] (German Schmalzownik ) were called persons during the German occupation of Poland who tracked down Jews for money, blackmailed them and their Polish protectors and / or betrayed them to the Germans .

The term, meant to be derogatory, comes from the Warsaw dialect of Polish- Yiddish ( szmalc / schmaltz = money in the sense of "fat booty" with the subliminal meaning "greasy"). In his autobiography, Henry Armin Herzog describes the circumstances and their disastrous significance for the Jews of that time in Poland who lived in hiding there:

“Mr. Zwolinski told us that many Poles would hunt down Jews who dared to penetrate their 'Aryan' world. At first they blackmailed them, and after they had taken everything from them, they handed them over to the Gestapo . In this perfidious double game, they finally received a reward for handing over a Jew. The underground gathered information about these so-called Schmalzowniks, and some of them had already been shot as a warning, but they did not give up. " 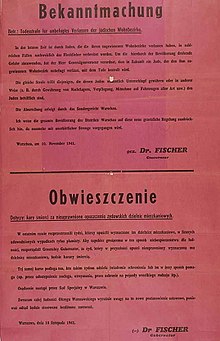 Poster dated November 10, 1941, announcing the introduction of the death penalty in German and Polish for Jews who left the ghetto and for Poles who helped them

The Polish resistance, organized in the secret underground state and the government in exile , viewed the activities of the Szmalcowniks as a collaboration with the German occupiers. The Polish Home Army ( Armia Krajowa ) punished such activities as treason with death. The Communist Lublin Committee ( Polski Komitet Wyzwolenia Narodowego ) also followed this line with a decree of August 31, 1944. This decree is still in force in Poland today, and anyone convicted of having been a Szmalcownik during the war will face life imprisonment fined. However , there were few such judgments after the war , as most of the Witnesses were either dead or had fled, and it is believed that most of the Szmalcowniks lived on undetected.

Activities during the occupation

There were many Szmalcowniks in Warsaw in particular, and they sometimes formed real gangs there, often with an ethnically mixed - Polish, German and Jewish - structure and division of tasks. Gunnar S. Paulsson estimates that one to two percent of Warsaw Poles belonged to them. That was about 13,000-27,000 people. By 1945, however, including 370,000 Jews, a total of 685,000 Warsaw residents lost their lives. The damage these criminals caused was considerable. Most, however, were only interested in money and deprived the Jews of the means they needed for food, bribes, payments to escape workers, and so on. In doing so, they increased the pressure on the Jews and their insecure living conditions, and constantly forced those living in hiding to look for a new and safer shelter. Blackmailing the Jews and their protectors increased this pressure considerably, as did the danger of ultimately being captured and killed.

“The main reason why only a few Jews were able to hide was because of the increasing number of Poles who turned Jews over to the Germans out of greed or for other reasons. Besides those who were later honored as Righteous Among the Nations , who helped the Jews out of humanitarian motives, there were not a few Poles who were paid for their help.

At the beginning of the German occupation, the blackmailers were usually content with a few hundred zloty . (The official exchange rate in the Generalgouvernement was 50 RM for 100 zloty from 1943 , which corresponds to approx. 195 €.) However, the demands rose to several hundred thousand zloty after Hans Frank , the German governor general in occupied Poland, passed the death penalty on October 15, 1941 had been introduced for certain offenses. On the one hand, this affected Jews because they were staying outside the ghettos; on the other hand, the death penalty also applied to Poles and their families, including children who help Jews.

On the German side, too, the Szmalcowniks were sometimes treated as criminals and punished accordingly. The reason was that they also bribed German officials and police , because after a rich Jew was denounced , the Szmalcowniks and the corrupt Germans often shared the stolen money. According to Jan Grabowski , over 240 people were sued in German courts in Warsaw between 1940 and 1943 for blackmailing Jews. 159 (66.3%) of the accused were ethnic Poles, 45 (18.7%) Germans (both Reich and Volksdeutsche ) and 36 (15%) Jews and other nationalities.

Use as an insult

Szmalcownik is also a term used as an insult. When the former Vice-President of the European Parliament Ryszard Czarnecki equated the liberal Polish MP Róza Thun with a Szmalcownik, he triggered an international scandal. The degradation was felt to be so intolerable, unworthy and the reputation of both Poland and the European Parliament that Ryszard Czarnecki had to face a parliamentary deselection procedure. This was a unique process up until then. In the vote on February 7, 2018, Czarnecki was removed from his office with the necessary two-thirds majority with 447 to 196 votes.