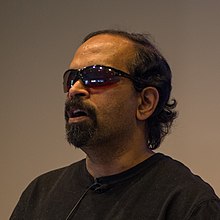 TV Raman (* 1965 in Pune , Maharashtra , India ) is an author and computer scientist . He is known for his work in the field of accessible internet .

Raman was born in Pune , India . He went blind from glaucoma at the age of 14 . In 1994 he received his PhD with David Gries at Cornell University . His dissertation was awarded a prize by the ACM . He worked for IBM and Adobe Inc. , among others, and has been with Google Inc. since 2005 . At Adobe, he was involved in improving the accessibility of the PDF format so that it could be used by US authorities. At Google, among other things, he works on a search engine for barrier-free websites and on control elements for mobile phones that are friendly to the blind .

In his work he uses Emacs , for which he wrote his own screen reader and full audible desktop with Emacspeak , with org-mode .