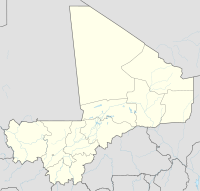 Taghaza (also: Tghaza or: Terhazza ) is an abandoned salt mine in a Sebkha , a former salt lake of the Sahara in the north of Mali , 800 km north of Timbuktu .

Rock salt on the market in Mopti

Taghaza was once an important station on the trade route from Sidschilmasa to Walata , and from around 1400 to Timbuktu. Its importance for the Trans-Saharan trade between Maghreb and West Africa was based on the fact that it offered an ideal stopover halfway from southern Morocco to Niger, in addition to the occurrence of high-quality rock salt , which was exported to West Africa in blocks for the salt supply of the cattle. In addition to luxury items from the Mediterranean region, this was an important item of exchange for the gold from the woodlands of Guinea , which was traded through the empires of the Sahel zone (see: Empire of Ghana , Empire of Mali and Songhaire Empire ).

Taghaza was first mentioned in a document (as Taghara ) by the Persian geographer Zakariya Qazwini around 1275 . He reported that the walls of the city were made of slabs of salt extracted by slaves. In 1352, after a twenty-five day caravan tour, the world traveler Ibn Battuta reached the market town of Taghaza on the way from Sidschilmasa to Walata. He reported that the huts of the mine slaves were made of slabs of salt, with camel skins as roofing, and that there was only brackish water, a lot of flies, but no trees. At the same time, however, there would be intensive trading in gold (dust). The productivity of the saltworks suggested that Taghaza could have been the Tatental salt mine described by al-Bakrī . In 1375 Taghaza became known in Europe by being mentioned in the Catalan World Atlas . In the 15th century, the Songha Empire took control of Taghaza. Around 1510 the Arab geographer Leo Africanus spent three days in Taghaza. In his work Descrittione dell'Africa (“Description of Africa”) he complained about the brackish well water and the precarious food supply that depended on sources of supply twenty days away. As it after 1540 conflict with from Morocco coming Saadians came to Taghaza, and the latter Ahmad al-Mansur captured the salt mine in 1586, the Songhai Taghaza gave up and opened instead km to the southeast 150 remote salt mine Taoudenni in the Valley of Gazelles . Five years later, the Songhai Empire collapsed after an attack by the Saadian people. Since there was now no regulatory power that could secure the trade routes, the trans-Saharan trade in the western part of the Sahara was severely disrupted: the main trade route shifted to the Bornus Strait between Lake Chad and Tripoli .

In 1828 René Caillié passed the ruins of Taghaza, accompanied by a caravan from Timbuktu that consisted of 1400 dromedaries and transported slaves, gold, ivory, gum resin and ostrich feathers.

In 1938 the Africa explorer Théodore Monod described their condition. In 1961, Raymond Mauny published an inventory of the 8 and 4 hectare ruins, 3 km apart, for the Institut fondamental d'Afrique noire (IFAN) in Dakar .

Taoudenni, on the other hand, continues to supply salt to Timbuktu for the herds of cattle in the Sahel. As in Taghaza at the time, it is extracted in open-cast mining: under an approximately 1.50 m thick cover layer of clay and low-quality salt in Taoudenni there are high-quality rock salt layers to a depth of 4 m, the lowest of which provides the best quality. Under extreme conditions, roughly 1.25 × 0.50 m large and 30 kg heavy rock salt slabs are knocked out of it with primitive tools, mostly by workers in bondage. The salt bars are transported to Timbuktu in 20 days in a caravan called an azalai , and a dromedary can carry four of these salt plates at a time.

In 2007, Algerian and Italian oil companies started their activities near Taoudenni. The current situation in the far north of Mali is precarious. Central transport routes for drugs from South America for the European market run here.