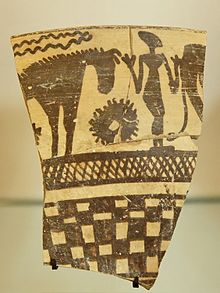 Tappe Sialk ( Tappe is the Persian form of Tepe / Teppe : "hill") is the name of two ruined mounds in Iran three kilometers southwest of the city of Kashan . The prehistoric sites are near the Fin Garden with its abundant water sources, which have attracted people since ancient times.

During French excavations led by Roman Ghirshman from 1933 to 1938, rammed earth houses from the 6th millennium BC were found in the older, northern Tappe Sialk A. And adobe houses from the 5th and 4th millennia found. Proto-Elamite tablets and cylinder seals date from the 3rd millennium . Some ceramics show similarities to finds in Turang-tepe and Jeitun .

The younger Tappe Sialk B in the south consists of a terrace complex from the 3rd millennium BC. And separately located necropolis .

The settlement was abandoned for about a millennium and was repopulated by newly immigrated Indo-European peoples in the middle of the 2nd millennium . The finds from this epoch come mainly from the necropolis, whose grave goods include bridles and painted jugs. Some finds belong to the Luristan bronze group . Since they were found in situ , they are important for the creation of a system of Luristan bronzes, which otherwise mostly come from the black market.

From 1999 to 2004, the exploration of the two hills was continued by Iranian archaeologists under the direction of Sadegh Malek Shahmirzadi. It turned out that the ziggurat dates from around 2900 BC. It is about 800 years older than the ziggurat of the moon god Nanna in Ur . Metal slags were found that were examined by the archaeometallurgists of the Freiberg Mining Academy. Excavations of the German Archaeological Institute in the prehistoric settlement Arisman 60 km southeast of Tappe Sialk show that the smelting of copper ore in the central Iranian highlands in the 5th millennium BC. Began.