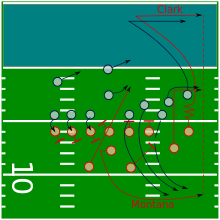 schematic representation of the move

The Catch is the catch of the game-winning pass from quarterback Joe Montana by wide receiver Dwight Clark in the NFC Championship Game between the San Francisco 49ers and the Dallas Cowboys on January 10, 1982. The Catch is probably the most famous action in the history of the National Football League (NFL). “Catch” is generally called catching a pass.

In a very even match, the 49ers took over the ball at their own 11- yard line, 27:21 behind . With 58 seconds to go, San Francisco was up to the 6-yard line of the cowboys. With a third down and three yards to the next first down , Joe Montana took over the ball with the intention of throwing a pass to Freddie Solomon , which was covered by the defense . Montana ran to the right of the sideline because he was pressured by two defensive ends and a linebacker . At first it looked like he was going to be slumped , but was then able to throw a pass into the back of the end zone at the last second . There Dwight Clark caught the ball with his fingertips. With a successful extra point , the 49ers took the lead 28:27 and won the game with this score.

It later became known that Clark was originally only intended as a third pass station for this move.

Two weeks after that game, the 49ers won Super Bowl XVI against the Cincinnati Bengals by 26:21. This was the first Super Bowl win for the San Francisco 49ers.