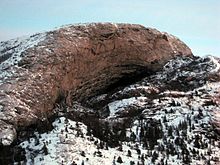 The “Hanshallaren” cave, in which the route is located.

The climbing route The Change was probably the world's first climbing route with a level of difficulty 9b + (French) or XII− (UIAA) or 5.15c (Sierra).

The route, which is around 50 meters long, was set up by Adam Ondra in the “Hanshallaren” cave near Flatanger in Norway and was first climbed on October 4, 2012 by him . Ondra suggested grade 9b +, which has not yet been confirmed.

The route can be divided into two sections ( pitches ), which Adam Ondra climbed in one piece:

The route has not been repeated since it was first climbed. This means that the proposed level of difficulty has not yet been confirmed by another climber.