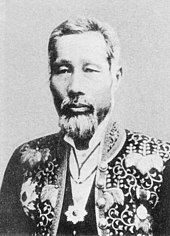 Tsuda Mamichi was a Samurai of the Tsuyama-Han . He studied Western sciences under Mitsukuri Gempo (1799-1863) and weapons science under Sakuma Shōzan . He himself then taught these subjects at the Bakufu school, the Bansho Shirabesho . In 1862 he was sent to Holland, where he studied economics and law at the University of Leiden and made friends with Nishi Amane . - After his return in 1865, Tsuda taught at the Kaiseijō ( 開 成 所 ), the forerunner of the University of Tokyo , and with the help of his notes wrote the first work on Western law in Japan, the "Taiseikoku hō-ron".

After the Meiji Restoration in 1868, Tsuda worked as a legal adviser for various ministries. For the Ministry of Justice he formulated the Shinritsu kōryō ( 新 律 ​​綱領 ), an early penal code, for the Army Ministry the Army Penal Act . He also worked for the Foreign Ministry . In 1876 he became a member of the Genrōin . He worked as a judge. In the first election in 1890 to the House of Representatives , the lower house of the new Reichstag , he was elected in the 8th constituency of Tokyo Prefecture , joined the pro -government Taiseikai and was the first Vice-President of the House of Representatives from 1890 to 1891. From 1896 to 1903 he had a seat in the manor house , the upper house of the Reichstag.

As a member of the Meirokusha , the association of Japanese intellectuals, Tsuda played a significant role in teaching Western thought and developing modern legal principles during the Meiji period. He wrote about 30 articles for the association's Meiroku zasshi ( 明 六 雑 誌 ) magazine .