Turamichele (High German: Turm-Michael) is the name of a mechanical figure game in the Perlach Tower in the old town of Augsburg . It shows the Archangel Michael fighting the devil . The Turamichele is only started on the days around September 29th, Michaelmas Day . On these days the wooden St. Michael appears between 10 a.m. and 6 p.m. every full hour at the bottom, for this occasion the window of the Perlach Tower decorated with flowers and stabs the devil lying at his feet with a lance at the beat of the hour .

The Turamichele is first mentioned in writing in a family chronicle from 1616. It is possible that the original play of figures was created in 1526 by the sculptor Christof Murmann the Younger and the clockmaker Georg Marquart.

After the Schmalkaldic War , when the Protestant majority in Augsburg was ruled by the Catholic minority, the custom established itself as a symbol of the Counter Reformation . With the representation, the Protestant opponents should be mocked.

After the imperial city of Augsburg was incorporated into the Kingdom of Bavaria in 1806, the annual custom was banned by the Bavarian government because the drama was considered silly and unworthy of the Enlightenment . However, an important role was played by the fact that the Augsburgers equated the devil figure with the new and unloved authority in Munich , who would have liked to have given the corresponding lance. It was not until 1822 that the Turamichele ban was lifted.

After the Second World War and the destruction of historical puppetry, the American occupation forces allowed the Turamichele custom to continue in 1946 (initially with two actors on a wooden platform at the Perlach Tower). A new wooden group of figures was donated in 1949 by the Augsburg malt manufacturer Ernst Gebler and made by the sculptor Karl Hoefelmayr from Kempten . 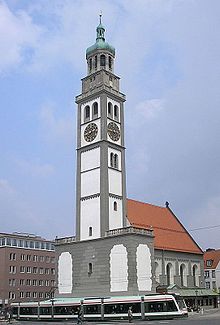 Michaelitag was once not only a mandatory holiday, but also a popular date for ongoing rent, lease or interest payments, apartment relocations and job changes. The following text in the Augsburg dialect on a postcard from 1899 indicates:

Today the municipal Turamichele festival on Augsburg's town hall square has become a big children's festival with colorful activities related to the Turamichele custom. Every hour countless adults and children gather in front of the Perlach Tower and wait eagerly for the appearance of the St. Michaels figure, in order to then count the archangel lances aloud to the beat of the hour. Traditionally, in a balloon flight competition, children let balloons with attached "Augsburg Peace Greetings" rise into the sky. In the meantime, there is even a separate "Turamichele song", which the Augsburg school children like to sing on the occasion of the festival:

The city of Augsburg is considering whether it could possibly include the Augsburg twin cities in this festival in the future, perhaps under the motto "Global Peace Festival", and wants to take up this idea in future contacts with its twin cities.

On the occasion of the Turamichele festival, the city of Augsburg annually organizes a market Sunday that is advertised far beyond the city limits. This form of commercialization of an originally church custom has been criticized from various quarters.

Another form of criticism is directed against the custom itself, which is not compatible with the principles of an open, free, democratic society. The turamichele is traditionally a symbolic figure for the struggle against pagans and other denominations, which is partly waged by warlike means, as well as for the supposed superiority of the German people and their culture from a nationalist point of view. The bloody representation of the total physical annihilation of the opponent is inhumane and not suitable for children.