The University of Nanjing ( Chinese  南京大學  /  南京大学 , Pinyin Nánjīng Dàxué , 南大 for short , Nándà ) in Nanjing ( People's Republic of China ) is one of the oldest educational institutions in China.

Its origins go back to 258 . In 1902 it was converted into a modern university. It is considered the birthplace of modern science in the People's Republic of China; In many cases it has played a pioneering role in the Chinese education system, for example with the introduction of co-education and student-centered teaching methods in contrast to traditional frontal teaching. Former President Jiang Zemin is one of the most prominent graduates . Nándà is one of the most important universities in the country and is always in the top 5 in numerous rankings. 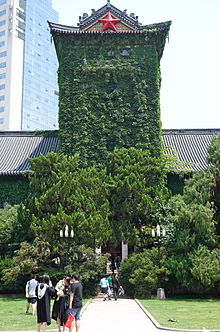 In addition to the Gulou campus in the city center, there has been another Pukou campus , also named after its district, since 1993 . Younger students in particular are accommodated there. In addition, the Xianlin campus was opened in 2009, which is located around 40 minutes northeast of the center in the Xianlin district.

Nanjing University has the following faculties:

The law faculty maintains very good relations with the Georg-August-Universität Göttingen . There is an exchange program, but so far only Chinese students study in Germany and the University of Göttingen maintains a permanent representation in Nanjing.

The Technical University of Kaiserslautern also maintains a student exchange with the School of Architecture at the University of Nanjing (since September 2003).

Foreign students also have the option of taking one of several Chinese courses, which range from beginners to advanced. On the Gulou campus there are also appropriate accommodation options for the students.

The John Rabe Museum is located on the university campus . John Rabe lived in this building during the Second Sino-Japanese War , who housed Chinese refugees there and did a great job of protecting civilians.