The Virtual Memory System ( VMS ) is an operating system from Hewlett Packard Enterprise (HPE) for its Virtual Address eXtension (VAX) computers. When it was first released, it was a very advanced 32-bit operating system that was multi-user and multi-tasking . It was also one of the first operating systems with virtual memory management , which is also the reason for the name. Today it is available in 64-bit versions under the name OpenVMS.

Version 1.0 was published in 1977, and DECnet was a powerful point-to-point connection between computers from the very beginning . With version 4 (from 1983/84) the first VAXclusters were configured which had a common system hard disk. At the same time, DECnet Phase IV was released with extensive Ethernet support. From version 5 it could handle graphic interfaces (DECwindows - OSF / Motif -compatible). The most recently developed versions 6.x from 1994 already had support for the 64-bit processor architecture Alpha (this variant was called AXP), which was developed as a successor to VAX , as well as modern data processing with XML and LDAP . Many of the PDP-11 , VAX and AlphaServers are still in use at large companies such as Deutsche Börse, EADS or FIAT.

DEC was taken over by Compaq in 1998 , which in turn was taken over by Hewlett-Packard in 2002 . In 1998 Robert Boers, one of the former DEC managers, bought the DEC European Migration and Porting Center . This initially resulted in the company Software Resources International , now Stromasys . The company develops emulators for old DEC servers. With this technology, OpenVMS can be retained as the operating system without an upgrade.

There is still an active community around what is now called OpenVMS . Besides VAX computers it runs on 64-bit Alpha machines and Intel - IA-64 systems.

OpenVMS is available in version 8.4.2, mixed clusters of VAX, Alpha and Itanium II systems were demonstrated. SMS solutions run on OpenVMS in the mobile communications sector, and exchange systems are operated under OpenVMS in the banking sector .

Even before the takeover by Compaq, Digital had made a commitment to the US Department of Defense to support VMS for another 20 years. So far it is not clear that HP wants or can withdraw from this obligation or that the Ministry of Defense no longer insists on compliance with this obligation. The fact that OpenVMS is considered to be an operating system that is comparatively safe from external attacks plays an important role in this context.

For non-commercial applications, licenses for OpenVMS and the most important programs are provided as part of the OpenVMS Hobbyist Program (membership in the HP user association Connect is required ). If the hardware required for OpenVMS is not available, a VAX computer can be simulated in software thanks to SIMH . There are also free emulators for the AXP architecture, for example the Personal Alpha from Emulators International.

In June 2013, HP announced that it would not port VMS to its own HP Integrity i4 servers, which are based on the Itanium 9500. Existing systems should be sold by 2015 and receive support by 2020. In July 2014, HP and VMS Software Inc. (VSI) announced that VSI would operate the further development of OpenVMS under license. This announcement is viewed as a turning point by OpenVMS user groups. 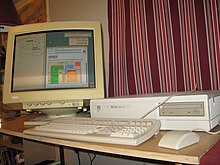 Sometimes OpenVMS is wrongly assigned to the Unix-like systems . But OpenVMS has more in common with Windows NT than with Unix . Various concepts used today in every current Windows system originate from VMS.

VMS does not distinguish between upper and lower case letters in the Files-11 file system , neither in command line arguments nor in file names ; however, since OpenVMS V7.3-1 you can set up a case sensitive file system .

Unlike Unix to disk rather than a directory below a global root involved, instead there - roughly similar to MS-DOS and Microsoft Windows  - drive names . The names of devices are partly dependent on the hardware used (e.g. $ 1 $ DGA4711), partly they can be freely selected (e.g. DSA815, a ShadowSet with freely selectable number 815).

File names consist of name, file type and version number (e.g. NAME.TYP; 1), NAME and TYP are each a chain of up to 39 alphanumeric characters. Changed files are saved as a new version, which differs in an incrementing version number after a semicolon in the file name (NAME.TYP; 1 → NAME.TYP; 2), later adopted by ISO 9660 . The older version is not deleted by the system; the user can do this with the DELETE or PURGE commands if necessary. The maximum possible version number is 32767. If this is reached, no new version of the file can be created. A clean up and renaming is of course possible.

Directory names are separated by a "." And can be inserted in "[]" or "<>" and placed in front of the file name after any drive identifier. A subdirectory entry is of the type “.DIR” and always has the version number “; 1” in an intact file system. Up to 39 alphanumeric characters can be used as identifiers.

High availability technologies such as clustering were implemented in VMS at an early stage, and numerous applications that require high availability still run under this operating system.

As a command line interpreter and script language that stands DIGITAL Command Language (DCL) is available. Commands are specified in capital letters according to convention, such as SHOW (information about the date, logged-in users, free memory space), RECALL, DIR and HELP.

The developers of VMS adopted concepts from the PDP systems RSTS / E, RT-11 and RSX-11 , which were widespread in American universities and worldwide research institutions in the 1970s.

As of version 5, DECwindows was offered as the standard graphic interface. It is a window system based on CDE . X11 and CDE themselves can also be used on OpenVMS as an alternative to DECwindows.

From 2010 to 2013 work was carried out to develop an open source VMS system called FreeVMS , which should also be usable on hardware platforms other than DEC Alpha and IA-64 . The development is still at a very early stage. Up to version 0.3.15 a modified monolithic Linux kernel served as the basis . The version 0.4 uses a L4 / X2 - microkernel .