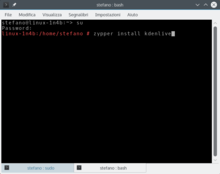 In its original form, a command line interpreter makes the operating system's own functions accessible to the end user through a line-oriented syntax on a system console . After the development of the first tube screens , the command interpreters were also adapted accordingly. The cursor was invented. More and more complex command line parameters and commands were added, including simple elements from programming languages , such as: B. loops or variables .

With the introduction of the Windows NT series followed those cmd.exein whose development the previous development command.comflowed and which emulated them up to the current Windows 10 . A significant further development of the cmd.exewas not carried out because during the development priority was given to the compatibility with the former MS-DOS.

For a long time Windows NT did not offer a command line interpreter on par with the Unix shells . This made many administrative tasks unnecessarily complicated. The concept that cmd.exefollowed was far inferior to that of modern Unix shells. That is why the first version of PowerShell was published in 2006 , which is based in many properties on well-known Unix shells such as Bash or zsh . In contrast to the Unix shells, the PowerShell follows the paradigm of object-oriented programming and is based on the .NET framework. The downward compatibility with MS-DOS played a subordinate role.

The command interpreter encapsulates the operating system compared to the user , and is therefore also called user interface or as Shell (Engl. For shell), respectively.

For experienced users, command interpreters have the advantage of quick and immediate control and the easy accessibility of all functions once the syntax, commands and their command line parameters have been learned. In addition, frequently recurring command sequences can be automated by batch processing , batch files, macros or scripts , which is generally very difficult to implement with a graphical user interface .

The AutoCAD command line (below) of AutoCAD 2014 on Windows

In the following, software is named which implements a command line interpreter ( CLI ). The list is incomplete as it is only intended to show a few examples.