Lisp is a family of programming languages that was specified for the first time in 1958 and was created at the Massachusetts Institute of Technology (MIT) based on the untyped lambda calculus . After Fortran, it is the second oldest programming language that is still in use.

Numerous dialects emerged on the basis of Lisp . Common Lisp and Scheme are among the most popular . Therefore, the term Lisp often refers to the language family and not to a specific dialect or implementation . 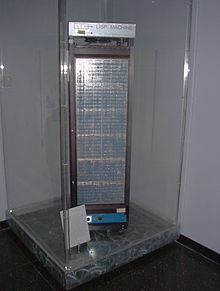 A Lisp machine in the MIT Museum

Lisp stands for Lis t P rocessing (list processing). This originally meant Fortran subroutines with which symbolic calculations such as those used in the lambda calculus were to be carried out. Steve Russell, one of John McCarthy's students , then came up with the fundamental idea of writing an interpreter for these expressions for the IBM 704 on the basis of his formulation of a "Lisp interpreter in Lisp" . The Lisp programming language was born.

The basic data structures of Lisp are single values (e.g. symbols, numbers, character strings), which are called atoms , and Cons cells from which lists are formed. The lists can be nested as required (lists of lists) . This also makes it easy to implement data structures such as an associative array . Lists are put in round brackets for representation in Lisp:

Program instructions are also (nested) lists in which the first list element in each case identifies the function to be performed. There is therefore no fundamental difference between data and programs; this property is called homonicity . The programmer can develop new control structures or object systems ( OOP ) ( metaprogramming , macros ). However, it also enables program parts to be manipulated as required during runtime.

Lisp offers the programmer great flexibility and extensive influence, which is why it is sometimes referred to as a programmable programming language . Data structures are built up dynamically without the programmer having to explicitly reserve or release memory space (see also garbage collection ). Declarations for data types are optional and a Lisp symbol can be used as a variable for any type of object. Many of these properties have been adopted in other programming languages ​​over time. In the early 1960s, however, they were way ahead of their time.

In the 1970s and 1980s, special Lisp machines were developed and sold. These made it possible to run Lisp programs quickly, which was only possible on general computers at the time by renouncing type checking and automatic garbage collection . However, this has changed with faster computers.

The acronym LISP is sometimes jokingly interpreted as "Lots of Irritating Superfluous Parentheses" (a lot of annoying, superfluous parentheses).

Lisp uses S-Expressions as an external format to represent both source text and data. Function and macro calls are written as lists that contain the name of the function or macro as the first element. Comments are introduced with one or more ;.

With (terpri)done a line break .

To implement a minimal Lisp system, only very few operators and a general mechanism for function definition are necessary. The following features are included in the original McCarthy report:

A remarkable part of the functions that common Lisp systems bring with them can be defined with these language elements.

In the original version of Lisp, there were two basic types of data : atoms and lists . Atoms were so named because they couldn't be changed. Lists were sequences of elements, and these elements could be atoms or sub-lists. An atom was either a number or a symbol. A symbol was an alphanumeric string that was used as a variable name or data element in symbolic arithmetic.

Internally, a symbol atom was only saved once in the symbol table . Two symbol atoms that were spelled the same and appeared in different places in the source code represented the same object.

Later other data types were introduced in the Lisp dialects, and the concept of Lisp atoms lost its importance.

"Lisp is a programmable programming language."

"Lisp is a programmable programming language."

"Lisp seems to be a lucky discovery of a local maximum in the space of programming languages."

"Lisp seems to be the happy discovery of a local maximum in the multitude of programming languages."