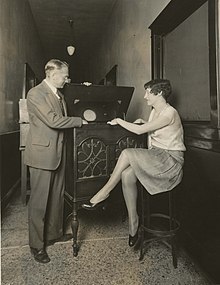 Vladimir Kosma Zworykin and Mildred Birt in front of a kinescope, 1929

Vladimir Zworykin studied at the University of Saint Petersburg from 1906 to 1912 . He was a student of the television pioneer Boris Rosings . From 1912 to 1914 he continued his studies in Paris, at the Collège de France , under the direction of Paul Langevin . During the First World War he served in the telecommunications force, after which he worked in the officers' radio school in St. Petersburg, then known as Petrograd. After the October Revolution of 1917, he fled to Omsk , at that time the center of the anti-Bolshevik movement in Siberia, where he was busy building radio stations. In 1919, during a business trip to New York, the anti-Bolshevik movement in Siberia was finally crushed, so there was no way back home. In the USA he became an employee of the Westinghouse Electric Corporation . He patented the Ikonoskop tube in 1923 . The iconoscope is the first useful device for electronically scanning images and breaking them down into electrical signals. Its prototype was not realized by Zworykin until 1933, at a time when his competitor Farnsworth had already built this tube and used it in a camera (first in 1926). However, in 1929 Zworykin invented the kinescope tube for the electronic reproduction of these images, making it one of the fathers of modern electronic television . Today's picture tubes practically correspond to Zworykin's kinescope.

Zworykin was also involved in the development of color television and the electron microscope (1942).

The IEEE awarded from 1952 to 1986 one named after Zworykin award for outstanding technical developments in the field Television.