The little bristle or oligochaeta (from ancient Greek ὀλίγος olígos 'little' and χαίτη chaítē 'hair') are one of the two subclasses (earlier orders) of the belt worms (Clitellata), which in turn belong to the annelid worms (Annelida). They include around 3500 species, of which around 600 live in the sea, the rest in fresh water or on land.

Little bristles consist of 6 to 600 homonomous segments. Furthermore, there are bristles without parapodia (lateral leg-like growths) directly on the body wall. Annular worms have a very muscular skin muscle tube that they need to move in the earth with the help of side bristles.

The little bristles are hermaphrodites and show the mode of reproduction characteristic of belt worms (clitellata): They form a kind of thick belt (clitellum), which is formed by secretion and in which the fertilized eggs develop. In practice, two individuals lie next to each other during copulation in such a way that the clitellum of one animal comes to lie opposite the sperm pocket of the other animal. Then the two seed pockets are alternately filled with the sperm of the other animal. The animals pull themselves out from under the hardening secretion coat of the clitellum with the front end and put their eggs into it. In the cocoon that forms from it, (external) fertilization takes place between the eggs and sperm cells.

However, there is also asexual (vegetative) reproduction by division in different families. Sometimes this happens in the form that initially small animal chains are formed, from which the new individual animals gradually pinch off and loosen (family Tubificidae, subfamily Naidinae), sometimes by pinching off without forming animal chains (family Lumbriculidae).

The original distribution areas, especially of the ground-dwelling species, have in some cases been greatly expanded due to displacement. Today the earthworms (Lumbricidae) from the northern hemisphere also live largely in the southern hemisphere. There they partly displace native worms, locally e.g. B. the Megascolecidae ("giant earthworms").

Ecologically, both in fresh water and on land, many species act as important destructors , which take part in the breakdown of organic matter and are involved in the conversion into new substances (clay-humus complexes). The species living in the soil mix and aerate it and also optimize the supply of nutrients (see bioturbation ).

In addition, some species are used as bioindicators for assessing water quality.

The taxon was introduced by Adolf Eduard Grube in 1850 . However, recent molecular genetic studies of ribosomal RNA indicate that the little bristle does not form a monophyletic taxon, especially since not a single common derived trait is known that distinguishes it from its sister group, the Hirudinea . They are therefore considered a paraphyletic group and, according to cladistic principles, would have to be divided into several taxa of the same rank as the Hirudinea. However, the phylogeny of annelids is still poorly understood. 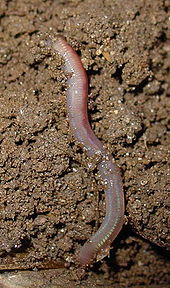 The most famous families are the following:

Systematics of Oligochaeta according to Jamieson 1988

In 1988 Barrie GM Jamieson created an internal system of oligochaeta from a cladistic point of view on the basis of morphological features, for which he used the structure of the genital organs as a criterion. According to Jamieson 1988, the little-bristle beltworms are jawless and with an extensive coelom , in which the testicles sit in front of the ovaries. The Chaetae are never articulated and are absent from the Achaeta. In contrast to the Hirudinea, the acrosome of the sperm is not enlarged in front. Contrary to what was postulated at the time, none of these features are now accepted as apomorphism of the oligochaeta, but are all considered plesiomorphies . Peter Ax regards this work by Jamieson as the only and failed attempt to establish the oligochaeta as a monophyletic group from a cladistic point of view.

The Aeolosomatidae listed in older systematics for the Oligochaeta were excluded by Jamieson in 1988, but also by Brinkhurst in 1982. Even if the Aeolosomatidae have segments with Chaetae and are hermaphrodites, due to their internal organization there is no evidence of any relationship with the clitellates.

In 1988 Jamieson granted the oligochaeta the status of a class and divided them into four subclasses: In the Lumbriculata with the only order Lumbriculida and the only family Lumbriculidae with exclusively freshwater species, the male sexual openings sit in front of the female, and some vas deferens lead from the funnels in the same Segment like the associated testicles outward. The Lumbriculidae often have numerous gonads. The nephridia are linked between the segments. The thick myofilaments have a square cross-section and an S-shape. The sperm have weak connective and a short acrosome. The Randiellata with the single order Randiellida and the single family Randiellidae have two pairs of testes, no atria, and one or two pairs of ovaries. The male sexual opening sits in the same segment as the associated testicles. The tubificata with the only order Tubificida have only one pair of testes followed by a pair of ovaries. The male genital orifices sit in front of the female ones, and the spermatic duct leads outwards through the segment following the testicle-bearing segment (plesiopor). The sperm have no connective and a very short acrosome. The families included in this are Tubificidae, Naididae, Enchytraeidae, Capilloventridae, Phreodrilidae, Dorydrilidae and Opistocystidae. The majority of the species are freshwater inhabitants, but there are some marine species and terrestrial species in the Enchytraeidae family. The Diplotesticulata include the other little bristles, including the well worms (Haplotaxidae) and the forms referred to in the broader sense as " earthworms " including the Lumbricidae native to Europe . As their name suggests, the Diplotesticulata are characterized by two pairs of testes, and in the basic plan also by two pairs of ovaries, so that they originally have a total of eight gonads, i.e. are octogonadial. The number of gonads may be reduced, in particular either the anterior or posterior ovaries may be absent. The connections on the acrosome of the sperm are well developed.

The Diplotesticulata are divided into two groups according to this classification from 1988: The exclusively aquatic Haplotaxidea with the only order Haplotaxida and the two families Haplotaxidae and Tiguassuidae have a tendency to no longer have a rear pair of ovaries. In the case of the Metagynophora, apart from three species, the anterior ovaries have been lost, so that there is only one pair that is located in the 13th segment or the segment corresponding to this.

The Metagynophora are divided into two orders: In the Moniligastrida with the only family Moniligastridae , the scrotum is suspended on the posterior septum of the scrotum segment. The vesicle glands are missing. Typically they have two pairs of vas deferens that lead out through the anterior segment (plesiopor). The ovaries are located in septum chambers. The prostate is capsule-shaped. The receptacula seminis each have a blind sac without sperm. The prostomium is withdrawn. Enterosegmental organs sit dorsally on the intestine. In Opisthopora there are usually two pairs of vas deferens that open outwards at just one pair of genital orifices or even just a single middle genital opening, very rarely at two pairs of genital openings. The vas deferens penetrate more than one segmental septum and open out in the 15th segment or a further back, often the 18th, less often the 13th segment, while the fallopian tubes only penetrate one segmental septum and have their mouth in the 14th segment.

The Opisthopora are divided into two sub-orders: The Alluroidina with the only superfamily Alluroidoidea and the two families Alluroididae and Syngenodrilidae are aquatic species in which the male genital orifices open outwards in the 13th segment. The Crassiclitellata have a clitellum made up of several cell layers.

The Crassiclitellata are divided into two cohorts: The Aquamegadrili with the families Sparganophilidae, Biwadrilidae, Almidae and Lutodrilidae are aquatic species in which the anus opens at the back and the body often has a rectangular cross-section. The Terrimegadrili are predominantly ground-dwelling little bristles. The anus is at the end of the body and only very rarely on the back. The acrosome of the sperm is quite long at around 2 µm. This group includes the families Ocnerodrilidae, Eudrilidae, Kynotidae, Komarekionidae, Ailoscolecidae, Microchaetidae (Microscolecidae), Hormogastridae, Glossoscolecidae, Lumbricidae and Megascolecidae, also known as "earthworms".

Recent attempts at a revision through molecular genetic work

While later investigations confirmed the special position of the Lumbriculidae as well as the monophyly of the taxon Crassiclitellata, today several other taxa from this system are questioned or rejected. A molecular genetic study by Erséus and Källersjö from 2004 on the ribosomal DNA of various belt worms gives the following picture for the representatives considered: While the Capilloventridae as a basal branch represent a sister group to all other belt worms, the latter are divided into two large groups, the first of which are families Naididae including the tubeworms as well as Phreodrilidae, Haplotaxidae and Propappidae, while the second includes the leeches and all other "Polychaeta". Within this, the Lumbriculidae and the flukes form a subgroup, while the Enchytraeidae and the monophyletic group of the Crassiclitellata with the examined families Lumbricidae, Almidae and Megascolecidae form the second subgroup. A study by Jamieson et al. based on ribosomal DNA. The division of the Crassiclitellata into a branch with aquatic and one with terrestrial forms could not be confirmed, rather there are two main branches in which the Crassiclitellata are distributed according to their geographical distribution in inhabitants of the northern hemisphere (Laurasia: Lumbricidae, Hormogastridae, Criodrilidae and Lutodrilus multivesiculatus) and in those of the southern hemisphere (Gondwana: Microchaetidae, Rhinodrilidae, Almidae, Glossoscolecidae, Eudrilidae and Megascolecoidea). According to this, the original girdle worms were water inhabitants, and it was only the Crassiclitellata that developed into land-living forms. While the Lutodrilidae and Criodrilidae as the closest relatives of the rural Lumbricidae and Hormogastridae have life in the water as their original characteristic, the Almidae returned to the water secondarily.

All of the more recent systematic studies on the oligochaeta characterize them as a paraphyletic group and point to a closer relationship between the leeches, primarily with the Lumbriculidae, but also with earthworms and enchytrae. So far, however, there is no established clitellata system on this basis.

Fossil bristles are very rare. In addition to some uncertain evidence from the Malm of Ulyanovsk (Russia) and from Paleocene deposits in the USA, some specimens from the Eocene Baltic amber have been identified as belonging to the Enchytraeidae family.