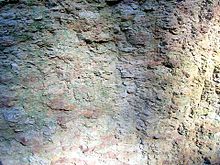 Weathered Ashfield Shale from the Wianamatta Group on the Pacific Highway near Chatswood , Australia

The Wianamatta Group (English: Wianamatta Shale or Wianamatta Group ) is the youngest geological formation in the Sydney Basin in New South Wales , Australia . In this formation, band clays and mudstones were formed in the Triassic , with a few sandstone deposits.

The Wianamatta Group is the youngest geological stratum of the Sydney Basin, and is therefore the top stratum at the highest point. It was deposited in connection with a large river delta that shifted from west to east over time. This can be seen in the sequence of the layers, which clearly show the transition from marine deposits in front of the delta to onshore deposits: The Ashfield Shale was formed from clayey marine deposits. The subsequent Minchinbury Sandstone emerged from beach- Nehrungs Islands. The Bringelly Shale was deposited in a swampy plain of alluvial land on the delta, through which rivers meandered and deposited sand in different, narrowly defined places, which later solidified into sandstone.

Today's weathering of the claystone occurring on the surface produces abundant clay , which leads to the formation of clay soils with low water permeability , such as are common on the Cumberland Plain . Here are Podsol widely floors, each swell upon supply of water and shrink with dehydration.

Water-bearing layers can form over the pitches of the Wianamatta Group. Deep and large clay deposits in this formation are able to collect groundwater ; however, if they are at or near the surface, saline arid land can form as the water evaporates. The quality of the groundwater above the clay layers can be good, so that potable water occurs, or it can be extremely saline and therefore inedible. The deeper-lying groundwater deposits in the rocks of the Wianamatta Group are generally less saline than the near-surface deposits.