Zelma Brauere , Russian Зе́лма Бра́уэре , (born 1900 ; died 1977 in Riga ) was a Latvian philologist . She worked for 43 years as a proofreader in the Latvian State Printing House. Its director Rihards Zariņš used Brauere's portrait for the designs of several banknotes and coins. With the depiction on the Latvian silver coin to 5  Lati from 1929, her portrait in Latvian national costume became a symbol of the Latvian nation. It was also used in the design of the Latvian euro coins at 1 euro and 2 euro.

Zelma Brauere grew up with two siblings in Riga. After completing school, she studied philology at the Latvian University until graduation . She spoke seven languages. She worked in the Latvian state printing company as a senior proofreader and spent her entire professional life, 43 years, in the company.

She appeared repeatedly as a model in Latvian national costume on the graphic works of Rihards Zariņš, for example in his multi-volume standard work Latvju raksti (German: Latvian ornaments ) on Latvian folk art and on illustrations for the satirical weekly newspaper Svari published by Jānis Roberts Tillbergs, published with Ludolf Liberts (German: Libra ). With the issue of the 5 Lati silver coin designed by Zariņš  , which showed the profile picture of Zelma Braueres in Latvian folk costume, she became the face of their nation for a large part of the Latvian population. Received private letters and some of his dedications suggest a personal relationship between Zariņš and Brauere, which, however, must have been a platonic friendship.

Brauere's fiancé, a pilot, was killed in an accident in 1935 at the Krustpils airfield . Brauere never married and lived until her death with her sister in a still preserved wooden house in the left of the Daugava located Riga district Āgenskalns .

In 1977 Zelma Brauere was hit by a motorcycle and fatally injured. Since the Soviet authorities did not allow her to be buried in the Riga Forest Cemetery (Rīgas Meža kapi) , she was buried in the cemetery in the Riga district of Lāčupe in the Latvian folk costume in which she was depicted on the 5 Lati coin.

Representations on coins and banknotes 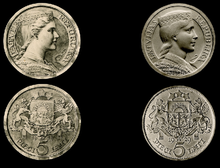 5 Lati, design by Rihards Zariņš (left) and shape by Percy Metcalfe , Medalist of the Royal Mint in London (right)

With the 5 Lati silver coin designed by Rihard Zariņš in 1929, he set an unusual monument for brewers. The coin was minted in the London Royal Mint ; for this, Zari Entwurfš's design was slightly revised by the medalist Percy Metcalfe in order to give the Latvian woman's head in national costume a more sublime appearance. Among coin collectors the coin is true with the great Latvian national coat of arms on the back as one of the most successful designs of monetary history.

The representation of Brauere as an allegory of Latvia quickly became popular with the population. All the more so as the issue of December 23, 1929 fell at a time marked by the global economic crisis and political scandals, when there was a strong need for symbols of national unity. The allegory was popularly called Milda , which brewers were persistently upset about. The popular silver coins hardly found their way into circulation, but were retained by the citizens, kept in jewelry boxes and given away to children and grandchildren or at weddings and baptisms. They were often converted into brooches or pendants as early as the 1930s . Those coins with the word DIEVS in the margin inscription DIEVS *** SVETI *** LATVOJU *** (German: God protect Latvia ) happened to be located exactly above the head of the portrait as a special lucky charm. After the occupation of the country, during the deportation to Siberia and in exile in the West, the jewelry was a distinguishing mark of Latvian patriots, which was often only recognizable as such to the initiated. During the decline of the Soviet Union , such jewelry was increasingly produced and worn as a symbol of the revived Latvian national consciousness.

Zariņš's draft has been taken up several times since Latvia regained its independence. The portrait of Zelma Braueres carries the banknotes for 500 Lati from 1992 and a gold coin for 5 Lati from 2003. In 2012, when Latvia's accession to the Eurozone was already certain, a 5 Lati silver coin appeared in the Royal Mint after the old ones still there Shapes was shaped. Apart from the changed year, these new coins made of sterling silver have a higher fineness of 925 ‰ than the original coins with 835 ‰ silver.

In a form revised by Guntars Sietiņš , surrounded by the twelve stars of the European flag , the Latvian euro coins for 1 and 2 euros bear Zariņš's design on the face. The Latvian population voted for this motive by a large majority in a survey before the introduction of the euro.