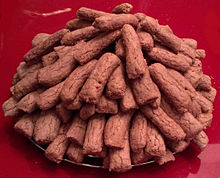 The cinnamon stick is a Swiss pastry with a strong cinnamon flavor.

The cinnamon stick is a cake about the size of a little finger with a pronounced cinnamon taste. It is five to six centimeters long.

The cinnamon stick is widespread in the upper canton of the Basel area in Switzerland , especially in the communities of Anwil , Oltingen , Wenslingen and Wittinsburg . It is mainly produced in private households and on farms for direct marketing.

The strong connection to the Upper Basel area can only be proven in writing in more recent publications. For example, in the “Heimatkunde von Anwil ” from the year 2000, a recipe for the cinnamon sticks can be found. Also the recipe recording in the publication “Baselbieter peasant women cook. 221 recipes from the Basel area and Basel ” from 2003 testifies to the tradition.