The Zoo Sofia is a zoo in the Bulgarian capital Sofia . It is the oldest and largest zoo on the Balkan Peninsula .

History of the zoo

Ferdinand I , who ruled the Principality of Bulgaria from 1887, was interested in entomology , ornithology and botany . In 1887 he issued a decree that a zoo should be built on the grounds of the royal botanical garden in Sofia, which was built by 1890. The first animals kept included otters , wild goats , deer , llamas , swans and cranes . Keepers were hired by the from Coburg hired Ernst Hublein were taught.

Birds of prey aviary in the old zoo

In the following years a bear house, a long aviary for peacocks and pheasants and a water basin for various water birds such as ducks , geese and swans were built. In 1895 a large vault-like aviary for birds of prey followed, in which black vultures , griffon vultures and bearded vultures , among other things , were kept. Sofia Zoo was the first zoo in the world to breed the rare bearded vultures. By the beginning of the 20th century, the animal population increased to 1384 animals from 266 different species .

The zoo survived the First World War unscathed, the animals could be looked after and a keeper kept vigil every night. During the Second World War , however, Sofia was bombed at the end of March 1944. During this time, the employees of the zoo looked for dead livestock and domestic animals on the streets of Sofia in order to ensure the survival of the carnivores. If the meat found was not enough, herbivores were killed so that they could be fed. In this way, the zoo was able to secure its existence during the war and rebuilt with great effort after the war.

At the beginning of 1966, the planning of a new zoo area began. By 1983 the buildings of this new zoo had been constructed and preparations for the move began. Transport boxes and cages were built. In 1984 the entire animal population was transported from the old site to the new zoo site. On September 10, 1984, the new location of the Sofia Zoo was officially opened.

Currently (as of 2021) 2460 animals from 312 species from all continents live in the zoo. Particular emphasis is placed on fish with 100 species, mammals with 81 species and birds with 78 species.

The structural facilities include a large aviary for birds of prey, an aquarium and a terrarium.

The zoo works with the Bulgarian Customs. He takes in partially confiscated animals. In 2012, for example, a large number of reptiles and other animals were stolen from a convicted animal smuggler on the Serbian-Bulgarian border; mostly they were young animals. Six monitor lizards , three caimans , three pythons , 15 chameleons , 49 tortoises , a very poisonous scorpion , poisonous frogs , snails , crabs and worms were given into the care of the zoo. Because the zoo had never held ten of the species, advice was sought from other zoos.

In 1968, the first elephant calf born at Sofia Zoo was fed with bread studded with nails by a visitor. The calf succumbed to its injuries. The second elephant calf also fell victim to an attack when it was poisoned with strychnine in 1973 . 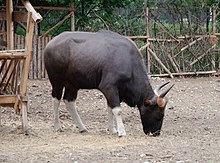 In the wake of the Russian-Ukrainian gas dispute in the winter of 2008/2009, gas supplies from Russia to Bulgaria were halted for some time. As a result, there was also a lack of natural gas for fuel and heating in Sofia Zoo , so that the zoo's central heating system could not be operated. In order to protect cold-sensitive animals, which make up about a third of the herd, from low temperatures, employees set up oil burners and electric heaters.

In August 2014, several animals of various species, gaur , bison , yak , trample and alpine ibex died within a few days . Initially, it was feared that the animals had developed bluetongue and died. The disease was common in Bulgaria at the time, but the animals did not show the symptoms. The zoo was temporarily closed to visitors. Later research showed that bran and grains that had been used as fodder were contaminated with pesticides .