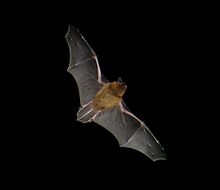 It reaches a height of 4.5 centimeters and a wingspan of up to 25 centimeters with a weight of 3.5 to 7 grams. So it weighs little more than a lump of sugar and, with folded wings, is the size of a matchbox. Their coat color is red-brown to dark brown, the underside yellow-brown to gray-brown. 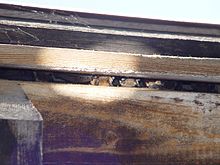 Pipistrelle bats prefer to hunt along vegetation structures. The main food is insects, especially two-winged birds such as B. Mosquitoes . Preferred hunting habitats are flown over a longer period of time and hunted. Unlike other light-shy bat species, piped bats also hunt in urban areas around street lights. The hunting areas are mostly a short distance from the nursery roosts, winter roosts can be up to approx. 50 km from the summer habitats. Usually, however, the distance between summer and winter quarters is less than 20 km. Pipistrelle bats are pronounced culture followers . Their summer quarters are usually located on buildings in crevices such as B. behind facade cladding. The females raise their young in so-called nursery roosts, which they move into from around May. The nursery roosts usually contain 50 to 100 animals, the rearing of the young takes about four weeks, then the nursery roosts dissolve. Males tend to sleep in solitary roosts. Winter roosts are probably also mostly in crevices in buildings; there are other finds of wintering pipistrelle bats in caves, crevices, tunnels and cellars. In the Carpathian Mountains there are mass winter quarters in which several 10,000 individuals winter together in caves. Before wintering, mating roosts are created in which the males try to lure females into their harem by singing flights performed in front of their courtship roost. After mating in autumn, the female stores the semen for seven to eight months before the actual fertilization takes place and the gestation period begins. The young are born in the nursery roosts from around mid-June to early July.

Like all European bat species, the pipistrelle is listed in Appendix IV of the Habitats Directive and is therefore particularly strictly protected. Although it is the most common bat species in Germany, it is due to loss of roost, e.g. B. endangered by building renovations and the use of pesticides and the resulting decrease in their food base. Wind power plants pose a further threat . The pipistrelle, with a share of 21% (as of April 2013) among the bats found as victims under wind turbines, is a species severely affected by wind power. The IUCN classifies the species as not endangered due to its frequency “least concern ”. It is listed as safe in the Red List .