The public transport system in San Francisco is mainly from the Bay Area Rapid Transit District and the San Francisco Municipal Railway operated ( "Muni"), with Muni next to the Muni Metro and the famous cable cars and various diesel and trolley bus operates -line.

BART (abbreviation for " Bay Area Rapid Transit ") is a partially subway -like local transport system that connects the largest places in the Bay of San Francisco in California . The first section between Oakland and Fremont opened in 1972. Today over 360,000 passengers are carried every day. The system has a track width of 1676 mm ( Indian broad gauge ) and is operated with 1000 volts DC voltage . The energy is supplied via a lateral power rail . With a top speed of 128 km / h and the large distances between stations, BART achieves an average speed of 53 km / h. The network is, considering the high train density not everywhere in the United States , generously developed, recognizable by the dual track layout of all lines, the low-speed route and the extensive track systems.

A trolleybus on line 1

In addition to the BART, the Muni Metro is the second means of rail transport that runs partially underground in the city center. Lines J, K, L, M, N and T run through the tunnel on Market Street parallel to the BART route and have the same stations there. In the further course, the routes branch out, especially on the western side of the tunnel. Lines N and T run along the shores of San Francisco Bay and also serve the terminus of the Caltrain.

Tram lines E and F operate as tourist routes with historic vehicles above ground on Market Street and along the Embarcadero (the coastal road).

The San Francisco Cable Cars are streetcars whose cars are driven by latching onto a rope. The three lines are among the most famous sights of San Francisco and are a listed building. 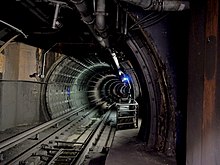 A tunnel of the Transbay Tube

The Caltrain is a suburban train traveling south from San Francisco through Silicon Valley. The route runs through Millbrae and Palo Alto to San José in Santa Clara County . Monday to Friday during rush hour, some trains continue to Gilroy . The train runs every 60 minutes on weekdays and is reinforced by express trains during rush hour, which means that five trains per hour run at this time. Trains also run every hour on weekends, supplemented by two express trains in each direction. Double-decker trains hauled by diesel locomotives are used. There is a transfer to the BART system at Millbrae station near San Francisco International Airport.

In addition to the Caltrain, several bus companies serve San Francisco in regional transport. They operate lines to the outskirts of the city and serve, among other things, extensive commuter traffic. Golden Gate Transit operates lines from downtown San Francisco over the Golden Gate Bridge , mainly to the neighboring Marin County to the north , and to Sonoma County . One line (93) runs entirely within the city limits of San Francisco. Almost all lines only run in rush hour traffic, in the morning towards San Francisco and in the afternoon from the city to the surrounding area.

SamTrans mainly serves San Mateo County , which borders the city to the south , but also has some bus routes to downtown San Francisco. These end at the Transbay Terminal . This is also where all the bus routes that drive over the Bay Bridge to the cities on the east side of the bay end. They are operated by AC Transit . Many of the Transbay bus routes go back to overland tram lines.