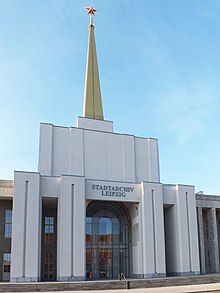 The Achilleion Leipzig is an exhibition hall built between 1923 and 1924, designed by Oskar Pusch and Carl Krämer , which was also used as a sports palace. It is located in Leipzig on the old exhibition grounds , southeast of the city center near the Völkerschlachtdenkmal and the German library . The building was badly damaged in World War II and has been known as the Soviet Pavilion (Exhibition Hall 12) since the subsequent renovation . After a renovation, the head building and part of the nave have been used by the Leipzig City Archives since October 2019 .

History of the building

In 1913 Leipzig was the site of the International Building Exhibition . The halls built at that time were partly used from 1920 for the technical fair, the success of which soon made new buildings necessary. The building, later called Achilleion, was built on the exhibition grounds from 1923 to 1924 as an exhibition hall for the members of the Association of German Machine Tool Builders. V. (VDW) .

In the 1920s, new sports facilities were built in many German cities, for example stadiums in Hamburg, Nuremberg, Frankfurt am Main and Frankfurt an der Oder and the Westfalenhalle in Dortmund. In Leipzig, too, people wanted a hall, especially for cycling races, but the city couldn't raise the money for it. Finally, the Association of Machine Tool Manufacturers agreed to make its exhibition hall available in the winter months, and the Sportplatz Leipzig association took over the costs of redesigning the interior. The architects of the hall provided the building with an antique portico to reconcile the sports audience with the sober, modern hall. On October 8, 1927, the sports hall was opened for 8,000 spectators under the name "Achilleion".

The sports palace in the exhibition hall was intended as a temporary solution, but remained Leipzig's only large sports hall for a long time. The concept of the combination hall with exhibitions and sporting events proved to be successful and was also adopted 50 years later for the construction of exhibition hall 7.

The Achilleion was badly damaged in the air raids of World War II . The first Leipzig trade fair after the war took place in May 1946 , and the old trade fair grounds were gradually made usable again. The Achilleion was not reopened as a Soviet pavilion until 1950 . Until the end of the GDR , it served as the starting point for tours of the trade fair by the state and party leadership. The portico was given a light-colored cladding and the building was given a distinctive golden tip with a red Soviet star .

The portico of the Soviet pavilion, like three other objects on the old exhibition grounds, is now a listed building .

On November 28, 2016, the foundation stone was laid for the renovation and conversion to the city archive, the opening of the same on October 29, 2019.