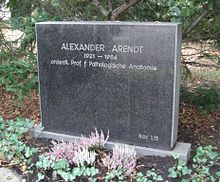 Grave of Alexander Arendt in the south cemetery in Leipzig

Alexander Arendt was born as the son of the dentist Theodor Arendt on February 28, 1921 in Oetzsch near Leipzig. He was a student at the Königin-Carola-Gymnasium in Leipzig. After graduating from high school, he moved to the University of Leipzig to study medicine in 1939 , but was expelled the following year because he was partly of Jewish descent. For the next two years he did a commercial apprenticeship and then worked for Victoria Insurance until 1944 . In 1944/1945 he was sent to German and French forced labor camps on the instructions of the Secret State Police . Then he was a nurse at a Kyritz hospital .

In 1946 he resumed his medical studies at the University of Leipzig, which he finished in 1949. In the same year he was awarded the dissertation to differential diagnosis and histopathology of Pick's disease and fibrosis of the small cerebral vessels to Dr. med. PhD . Until 1951 he was an assistant doctor at several hospitals in Leipzig. He was then hired as an assistant doctor at the University's Brain Research Institute and at the Neurological-Psychiatric Clinic. Promoted to specialist in psychiatry and neurology in 1955, in the same year he went to the brain research institute of Leipzig University as senior physician. The following year he gave up the job.

Arendt then returned to the medical faculty in 1959 as a specialist and senior assistant. In 1963 he completed his habilitation with the habilitation thesis Die Geschwülste des Zentralnervensystems and its appendices. Her tissue pictures, order and differentiation in the field of pathology and became a lecturer the following year , which he remained until 1968. He was then promoted to teaching professor . He finally became a full professor in 1969 and held the position until his death on October 5, 1986 in Leipzig at the age of 65.