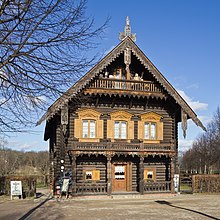 A typical house on Alexandrowka

The Russian colony Alexandrowka is located in the north of the city of Potsdam . King Friedrich Wilhelm III. von Prussia had them put on in 1826/27 for the last twelve Russian singers of a choir formerly consisting of 62 soldiers.

Due to the family and friendly relations between the Hohenzollern and Romanow houses , the colony was named as a memorial to the memory of Tsar Alexander I , who died in 1825 . As part of the Potsdam cultural landscape, the colony is a UNESCO World Heritage Site .

Of the well over a thousand Russian soldiers captured in Russia in 1812, 62 remained in Potsdam in October 1812. From this group a choir was formed and formally subordinated to the 1st Prussian Guard Regiment for the king . According to the neutrality agreement, the Tauroggen Convention of December 30, 1812, Prussia and Russia allied themselves against France in the spring of 1813 and the majority of the former prisoners of war were integrated into their own regiment at the request of the Prussian king. Russian and Prussian troops, former Russian prisoners of war and Prussian deserters fought against Napoleon under joint leadership. In the king's army camp , the choir of former Russian prisoners of war continued to provide entertainment, losses in its ranks were compensated for in 1815 by releasing more grenadiers from a Russian regiment: Tsar Alexander I not only allowed the soldiers' choir to remain in Prussia, he also transferred seven grenadiers from one of his regiments in the king's guard regiment.

When Tsar Alexander I died in 1825, only 12 of these Russian singers were still living in Potsdam. On April 10, 1826, Friedrich Wilhelm III. following order:

“It is my intention, as a permanent memorial to the memory of the bonds of friendship between Me and the high-soul emperor Alexander of Russia's Majesty, to found a colony near Potsdam, which I will occupy with the Russian singers given to me by His Majesty as colonists and want to name Alexandrowka. "

In 1827 the new residents moved into the fully furnished property. Even the gardens were laid out and every household was given a cow. The land was not allowed to be sold, leased or pledged by the colonists, but it was allowed to bequeath it to male descendants. 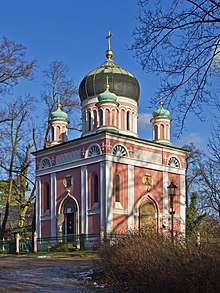 The Russian Orthodox Alexander Nevsky Memorial Church was built on the nearby Kapellenberg and consecrated in September 1829. Next to the church is the fourteenth house where the Russian royal lackey Tarnowsky lived.

The last singer died in 1861. In 1927, 100 years after the founding of the Russian colony, there were only four families left and after the land reform only two families were the direct descendants of these first singers. In 2008 the last of the direct descendants of the Schischkoff family died in the colony. The colony itself was privately owned by the House of Hohenzollern until the prince expropriation in 1926, but was administered on foot by the 1st Guard Regiment . Only after the regiment was dissolved, after 1919, the Hohenzollern family took over the maintenance of the site. The former royal provisions on the rights and obligations of residents remained in force until 1945. Fundamental changes in the legal status of the colony and its inhabitants did not take place until the Soviet Zone and GDR. Most of the houses have been privately owned since German reunification . 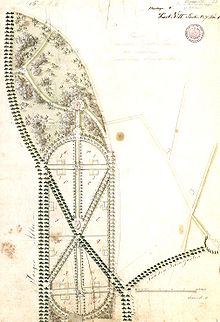 Plan drawing by Peter Joseph Lenné, 1826. The central axis and the transverse axes were not implemented.

Well at the intersection of the plant

After two completely different-looking designs, the gardening director Peter Joseph Lenné gave the entire site the basic shape of a hippodrome with inlaid St. Andrew's cross , at the intersection of which was the sergeant's house . Under the direction of the court gardener Johann Georg Morsch the Elder . Ä. this draft was implemented.

The plans for the buildings were Prussian interpretations of a drawing by the Italian-Russian architect Carlo Rossi , who had designed a “typically Russian” village for the Tsarina Mother in the Pavlovsk Park in 1815 and left a sketch to the Prussian king after his visit to the Tsarina Mother in 1818 . Military craftsmen of all Prussian guards regiments built the half-timbered houses with semicircular wooden trunks in front of them, which externally gave the impression of Russian log houses. The idea for this cost-saving measure came from the commander of the guards pioneer division, Captain Snethlage, who was already in charge of  the construction of an earlier, real log cabin based on Rossi's design - the Nikolskoë log cabin .

The settlement consists of a total of twelve farmsteads, the free-standing gabled houses of which are one and two-story, a two-story overseer's house without a large garden and a house near the church in which the overseer of the royal tea room lived on the first floor.

According to the Russian model, the roofs of the houses should have been covered with thatch - for the Prussian variant, it was decided to use wooden planking, which was replaced by slate roofing at the end of the 19th century . Each homestead consists of a residential building with a balcony and a loggia in front , which is connected to a small stable building by a covered gate entrance.

In January 2005, the Alexandrowka Museum was opened in House No. 2 of the Russian Colony , giving visitors an insight into the history and architecture of the log houses. This museum shows the construction method and gives explanations of the history of this unique settlement on numerous boards.