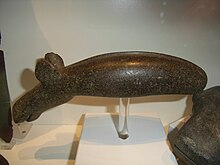 Alunda elk in the Historiska museet

The 15 cm long stone sculpture of the Alunda elk ( Swedish Alundaälgen ) is a prehistoric sculpture from Sweden . The arcuately curved, completely ground utensil made of black-green rock has a naturalistic animal shaped head at one end and at the other an indicated ax edge and the associated Schäftungsloch on. It dates back to the Neolithic Age and was found in Norrlövsta near Alunda in Uppland .

The long, narrow head with erect ears is that of a cow elk . The device is drilled conically about halfway from below. The hole is intended for a creation. But the sculpture was not an ax . It can have been a sign of dignity or a totem for the supernatural connection with the animal species depicted.

The Alunda elk is unlikely to have been made in Sweden. It belongs to a number of ax-shaped stone tools ( Norrbottnisches tool ), the area of ​​distribution of which is in central and western Finland in Karelia and the area between Lake Ladoga and Lake Onega . All objects with an animal head come from the east of Sweden and must be seen in the same cultural and historical context as the animal head daggers and the north Scandinavian rock art. In the rock carvings by Nämforsen , in Näsåker in northern Sweden, people are shown carrying sticks with elk heads on them.

The ritual staff made of antlers from the 3rd millennium BC shows a comparably beautiful elk head . BC, which was found in the Lithuanian Šventoji (also Šventosios) near Palanga . Another elk head can be found in the southern Finnish city of Huittinen. The oldest soapstone sculpture in Finland comes from the Stone Age settlement of Palojoki in Vittis. Manufactured before about 7000 BC. By hunters in the manner typical of the groups of the Nordic coniferous forest belt.