Andreas Knöpken (also: Knopke, Knopius, * around 1468 near Sonnenburg (Polish: Słońsk); † February 18, 1539 in Riga ) was a German priest and is considered the first reformer of Riga. 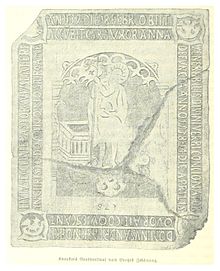 Marking of the tombstone (Riga city chronicle by Mettig, 1897)

Knöpken came from Priebrow near Küstrin (now Polish: Przyborów ) near Sonnenburg . Report the oldest information that he in 1492 pastor in wholesale Möllen was and the Coming of the church in the neighboring village Stretz had. In addition, he probably had a vicariate in Bublitz of the Bishop of Cammin . Shortly afterwards he got to know Johannes Bugenhagen , probably through his brother Jakob, who was vicar in Treptow at Rega and later came to be canon to St. Peter in Riga.

In 1522 Knöpken disputed with representatives of the old church in Riga about 24 Reformation theses that he had put forward. He is then elected Archdeacon of St. Peter. Archbishop Jasper Linde can neither prevent his election nor prevent his subsequent reformatory activity. In doing so, Knöpken tends to follow the Wittenburg course of cautious change and gradual institutionalization of the new order and tries to avoid social unrest.

In 1524 his commentary on the letter to the Romans was printed in Wittenberg with a preface by Melanchthon. In the spring of 1529 he worked with the Prussian reformer Johannes Brießmann to draft a general order for church service , which in 1533 also became binding for Reval and Dorpat. The order ascribes a high degree of autonomy to the individual congregation; a hymn book is also attached to it, which also contains five songs by Knöpken. He is particularly dedicated to the school system.