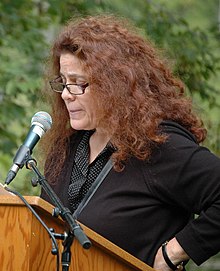 Anne Michaels (born April 15, 1958 in Toronto , Ontario ) is a Canadian writer and poet . She studied English (BA 1980) at the University of Toronto and is a lecturer in creative writing there. She composed for the theater.

Michaels was first known as a poet. In 1980 she received the Norma Epstein Award for Poetry . Then she published her first volume of poetry, The Weight of Oranges , which received the 1986 Commonwealth Poetry Prize for the Americas . The next volume, Miner's Pond (1991), was shortlisted for the Governor General's Awards and won the National Magazine Award and the Canadian Authors' Association CAA Award for Poetry . Her third volume of poetry, Skin Divers, was released in 1999.

Michaels' main theme is love in its various forms and its ability to heal. The language is unique to her with its ability to describe loss and pain and thereby enable memory . Her first poems are personal to the point of autobiographical echoes. Later the point of view of others is added, e.g. B. from people from the past ( Alfred Döblin , Johannes Kepler , Karen Blixen , Anna Achmatova , Marie Curie ). Metaphors from natural science are often used in their lightly floating free verse. In the sprinkles of thought poetry, the you address predominates.

Her novel Fluchtstück (1996), also published in German, deals with the Jewish suffering caused by the Germans during the Nazi era , which continues to this day . She says:

“When I started the book, I didn't know if I would come out on the other side with something like a belief. That was a big risk. Maybe it took me so much time to read the book because I was determined to come out of it with a confidence that I had fought for myself, and not a belief that was habitual or just asserted. "

The novel Fluchtstück tells of the relationships between a Jewish man and different people, through which the fragments (“fleeting pieces”) of his life as a refugee finally come together to form a whole. After the protagonist's death, a young man follows in his footsteps. As the son of a Holocaust survivor, he had to inherit the ominous inheritance of a (not personally experienced) horror. Woven into the novel is the fate of a Greek geologist who was involved in archaeological excavations of the Iron Age settlement of Biskupin in the 1930s and who saved the child's protagonist by fleeing to Greece .

The novel became a worldwide bestseller and has been translated into 30 languages. The author and work received several prizes, including a. the British Orange Prize for Fiction , the Lannan Literary Award , the Toronto Book Awards , the Trillium Book Award , the Books in Canada First Novel Award, the Guardian Fiction Award and the Italian Giuseppe Acerbi Prize. The New York Times voted him "Notable Book of the Year". There is a stage adaptation. A film directed by Jeremy Podeswa called Fugitive Pieces was premiered in 2007.