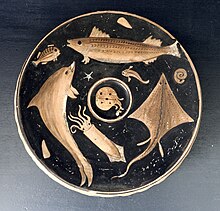 An Apulian fish plate (inventory number U 23) belongs to the collection of the Antiquities Museum of Heidelberg University .

The shape of the plate follows the common shape of Lower Italian fish plates . It is made of beige clay and has been preserved both seamlessly and completely to this day. The entire height is 4.4 centimeters, the edge alone 3.2 centimeters, the diameter 23 centimeters. The upper side, apart from the free spaces for the figures, and the base are covered with black gloss. The heavily sintered underside is provided with a red coating, which is supposed to be reminiscent of Attic ceramics. The ornaments are also kept in glossy black. The plate is in the third quarter of the 4th century BC. Dated. At what time it came into the collection and where exactly it was acquired is unclear, according to the documents it comes from Puglia .

The painting on the plate is particularly successful, a large number of the animals shown are more or less recognizable to this day and can be classified biologically. A small eyespot electric ray , wrongly identified as a jellyfish , is drawn in the inner recess . Four larger and six smaller creatures from the water are depicted around this motif. The largest living thing is a dolphin . The largest fish is likely a mackerel . The rhombic fish is a nail ray, the black and white camouflage spots on the back are clearly visible. The painter shows a squid of the genus Ommastrephes , (actually Ommatostrephes, "eye twister") between the nail ray, the dolphin and the depression in the middle . Two tentacles designed with white paint almost reach as far as the small, indeterminate starfish between the heads of dolphins and mackerels. A mussel is shown above each of them, a more precise determination is not possible, as is the case with the worm next to the nailed ray, possibly a bristle worm . The small fish under the mackerel 's belly could be a sky - looker , the one above the dolphin's head could be a sea ​​bream . Half of the edge is red and black, the pattern is a wavy meander . This shows a common ornament on the one hand, but also alludes to the sea on the other.